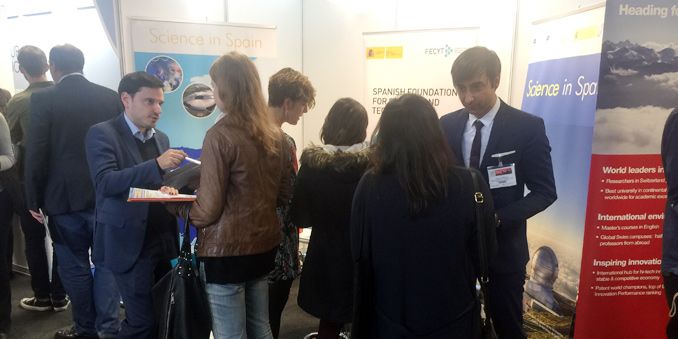 For the second year in a row, the Spanish Foundation for Science and Technology (FECYT) recently published a series of booklets collecting all opportunities to carry out the reseacher career in Spain, which have been showcased in different scientific meetings at both the national and International level. Last 4th and 5th October, FECYT organized a seminar in the Spanish embassy in London and had a promotional stand in NatureJobs Career Expo London, respectively.

The event held in the Spanish embassy in London had around 40 attendees and was inaugurated by the Counsellor for Cultural and Scientific Affairs of the Spanish embassy Mr Miguel Oliveros. Oliveros highlighted the value of the campaign “Science in Spain” for the potential to attracting national and international scientific talent, as it had been touring in the UK, US, Germany and Ireland since 2016.

Next, Lorenzo Melchor, FECYT science coordinator in the Spanish embassy in London, introduced all the produced material and summarized the main public and private funding calls for all stages of the researcher career in Spain.

There were two calls that were given special attention. On the one hand, the Junior Leader Postdoctoral Fellowships call by Fundación laCaixa and that is specific to developing your postdoctoral stage in any of the Excellence Research Centres and Units Severo Ochoa and María de Maeztu. On the other hand, the TECNIOspring+ COFUND initiative to promote research in the industry sector, which was showcased by director of the Catalonian Trade and Investment Office in the UK and Ireland, Oscar Martí.

Likewise, Antonio Molina, director of the Centre for Biotechnology and Plant Genomics (CBGP) introduced the main research programmes of this research centre that has been recently awarded with the Excellence Research Centre Award Severo Ochoa. Molina also spoke about the researcher profiles that are actively sought to reinforce their scientific staff, with special attention to Ramon y Cajal fellows.

As a good example of a local initiative for scientific and entrepreneurial talent attraction, Iñigo Olaizola and Yesenia Otamendi introduced “Fomento de San Sebastián”, showing their different support, fellowships and services that it offers.

Over 1,400 people attended this science job fair, most of them being undergraduates, postgraduates, Master students, PhD students and postdoctoral researchers. The exhibition offers attendees the opportunity to attend many debates about science careers, workshops for CV writing, mock job interviews and a space with plenty of stands from institutions, foundations, research centres and universities from across the globe, where attendees can get additional information. For the second year in a row, FECYT participated in this exhibition with the stand “Science in Spain”.

With two delegates, FECYT informed students and scientists about the variety of opportunities and research centres and universities that Spain offers to develop any stage of the researcher career. All the promotional material brought to London ran out by the end of the day.