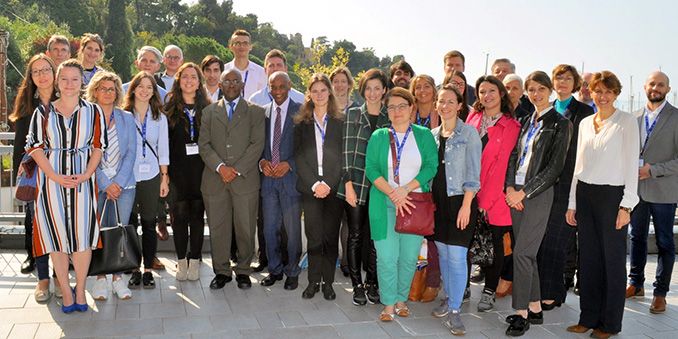 The Spanish Foundation for Science and Technology (FECYT) collaborated in the 1st European Science Diplomacy Workshop of the H2020-funded consortium named “Using science for/in diplomacy for addressing global challenges (S4D4C)”, which was celebrated on 21st-23rd October in Trieste (Italy) with the title “Science meets Diplomacy: a new European perspective”.

This first workshop aimed to train up to 24 professionals, who were selected out of a pool of over 400 applicants, in basic notions on diplomacy, internacional science, science diplomacy and a wide range of skills that are required to fulfill professional roles in the intersection between science and international relations. The selected participants were mostly scientists and researchers, but there were also science policy makers, diplomats and science attachés from embassies.

FECYT, as partner of the S4D4C consortium, collaborated in the design of the workshop and participated with an introductory seminar about what science diplomacy is, and a roundtable about professional careers in science diplomacy. Additionally, it fostered debate and interaction during the three workshop days among attendees.

After the networking conferences in Berlin and Madrid, this collaboration reinforces the activity already undertaken by FECYT, for several years, in support of an innovative science diplomacy participated by multiple stakeholders.

Likewise, they received information about research case studies undertaken by the consortium on water management or joint research programming collaboration between different countries. They got involved in simulation games about these cases, but also they got to discuss the global implications of Solar radiation management. This experience helped them to put in practice all the concepts delivered during the workshop seminars and to make them aware of the challenges and complexity of science diplomacy scenarios.

Participants also had the opportunity to visit the Elettra synchrotron to find out the role that a large research infrastructure plays in science diplomacy.

The workshop ended with a roundtable about different professional careers in this field and two interactive sessions for participants to think about new collaborative projects to put in motion in their home institutions, and to test their acquired knowledges and skills.

In the next few weeks, the S4D4C consortium will celebrate its second workshop in Vienna, which participants will be mostly from the diplomatic sphere.

About S4D4DC
The European consortium “Using science for/in diplomacy for addressing global challenges” (S4D4C) is to support current and future European science diplomacy for the benefit of European capacities, EU foreign policy goals and especially the development of solutions for global challenges. The consortium involves up to 10 European institutions among which FECYT is present. This project has received funding from the European Union’s Horizon 2020 research and innovation programme under grant agreement No 770342.