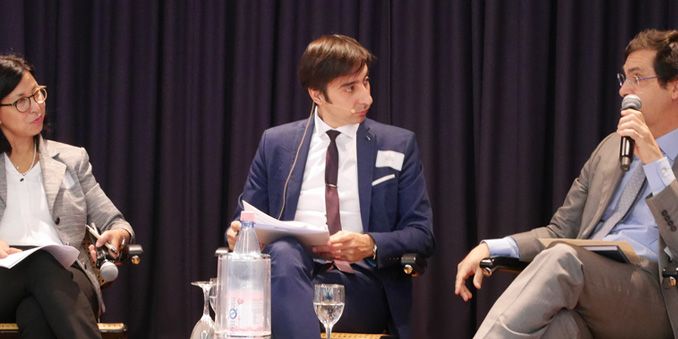 The Spanish Foundation for Science and Technology (FECYT) participated, last 10th October in Berlin, in the 2nd International Conference of the H2020-funded consortium on science Diplomacy named “Using science for/in diplomacy for addressing global challenges (S4D4C)”, which title was “Towards a European Science Diplomacy Roadmap”.

The conference aimed to foster a joint discussion about the visions, achievements, challenges and principles of European science diplomacy, in order to produce a set of recommendations and actions for the European Commission for the next few years.

FECYT, as partner of the S4D4C consortium, was responsible of coordinating the programme and fostering debate and interaction among attendees. This action reinforces the activity already undertaken by the foundation, for several years, in support of an innovative science diplomacy participated by multiple stakeholders.

The conference started with a conversation between a scientist and a diplomat who have both performed science diplomacy actions during their careers. Next, there was a roundtable around the Mediterranean region and how different stakeholders—the European Union, international institutions, universities or large research infrastructures—all contribute to international scientific cooperation between such diverse countries around common challenges such as water scarcity.

The S4D4C consortium presented their preliminary results about their research case studies on infectious disease and zika virus, food security, the role of large research infrastructures such as the SESAME synchrotron, or about its training workshops  to build up capacities, among others.

The day ended with a debate around different Member States’ science diplomacy national strategies and how the European Union could design a global or regional strategy to bring them together. Lastly, representatives from the European Commission and the European External Action Service introduced their current activities.

In the next months, the S4D4C consortium will publish the conclusions of this conference and will announce the save-the-date for the next one in Brussels in autumn 2020.

The first conference was organized by FECYT in December 2018 in Madrid under the title “EU science diplomacy beyond 2020”. Its conclusions were reported in the “Madrid Declaration on Science Diplomacy”, which establishes a new vision about the Science Diplomacy concept, its potential benefits and challenges for global actions, and has been supported by over 100 experts in the field.

About S4D4DC
The European consortium “Using science for/in diplomacy for addressing global challenges” (S4D4C) is to support current and future European science diplomacy for the benefit of European capacities, EU foreign policy goals and especially the development of solutions for global challenges. The consortium involves up to 10 European institutions among which FECYT is present. This project has received funding from the European Union’s Horizon 2020 research and innovation programme under grant agreement No 770342.