“Ambassadors for Science” shows how scientific knowledge can improve diplomacy 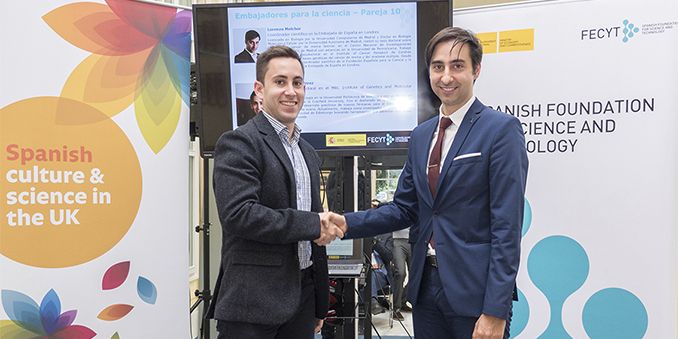 The 2nd edition of "Ambassadors for Science" was launched in November 2017 with ten couples of scientists, diplomats and counsellors, who all shared a few days to learn first-hand about their respective professional worlds. In February 2018, all groups gathered to share their experiences during the last session.

The 2nd edition of "Ambassadors for Science" was launched in November 2017 with ten couples of scientists, diplomats and counsellors, who all shared a few days to learn first-hand about their respective professional worlds. In February 2018, all groups gathered to share their experiences during the last session.

This report goes through the experience of two of these couples:

The diplomat and the science coordinator both visit the universities
María visited José in QMUL on 20th November 2017 to learn about the latest breakthroughs in biomedical engineering and to carry out some experiments in the tissue culture lab. In the afternoon, the researcher organized a coffee session with Spanish academics where Maria explained everything about diplomacy. Lorenzo Melchor, science coordinator in the embassy, also joined the session and explained his role.

Lorenzo visited Carlos at IGMM on 19th January 2018. There, he spoke with Carlos’s team to be brought up to date on breast cancer research. Then, he was guided through the research centre by Communications Officer Dee Davidson and Research Engagement Officer Christine D’Offay, visiting the bioinformatics or robotics units and the zebra fish containment rooms. At midday, he gave a seminar about his career “From Cancer Genetics to Science Diplomacy”, followed by a break with Spanish researchers. In the afternoon, Carlos told him about his research on new approaches for better stratification of breast cancer patients.

The researchers visit the embassy
Carlos visited Lorenzo at the embassy on 22nd and 23rd November. He saw how Lorenzo organized and chaired the debate “Ciencia, comunicación y sociedad” with comedian Goyo Jiménez and communicator Luis Quevedo (Listen to the audio in Spanish, here). The day after, Carlos learnt about the varied activity of the Office for Cultural and Scientific Affairs, and how FECYT and Lorenzo’s work fit in it. In the afternoon, they both went to a symposium on international collaboration on quantum technologies and to the CaSE Lecture 2017 “Britain’s Place in the World”, focused on Brexit and science and given by Rt Hon Hilary Benn MP, Chair of the Select Committee for the exit of the EU.

On the 15th January 2018, Jose visited the embassy during the morning to discuss with diplomat María Cruz Guzmán. María told him about her job as First Political Counsellor, which is about performing a close monitoring of British politics and its potential implications with Spain.

What have the researchers learnt from this experience?
José reckoned “the great task of María in explaining to me the role of a diplomat, how important is to keep good relationships between countries and the political tension that historical questions such as Gibraltar may cause”. The researcher also valued the introductory seminars: “They were very useful first to discern between politics and diplomacy, concepts that usually may be confounded, and second to expose me to science diplomacy”. Regarding the coffee he organized in the university, he said “it was a good opportunity to showcase the scientific activity done in the embassy for the last years, but also to promote better engagement with the Spanish scientific community in the United Kingdom and its needs and doubts”.

Carlos was exposed to the whole endeavour of FECYT in science diplomacy, understanding the role of science coordinators in the embassies. According to him, “these days spent with Lorenzo have allowed me both to learn about another field of work in science beyond research, and to understand the role that science diplomacy plays in the big task of bringing science closer to all society circles”. Indeed, Carlos ensured that he had “though out of the box” and witnessed “the relationship between science, policy, and society with a wider scope”.

What have the embassy staff learnt from this experience?
María acknowledged “this great exposure with Jose to science and the latest breakthrough in health sciences”. About her visit to the university, the diplomat was “greatly surprised with the amount and quality of so many Spanish scientists working in the best British universities. This is without a doubt a target group that our embassy has to make efforts to further support them in their careers and to give visibility to their actions”.

Lorenzo said: “getting to know Carlos and visiting him has brought me up to date in the latest breakthroughs in personalised medicine and breast cancer patient treatments. As we share some life experiences, it has been quite special to have a scientific discussion with him and learn about his next projects”. Lorenzo also noticed “the important scientific development carried out in Scotland for the last years”. 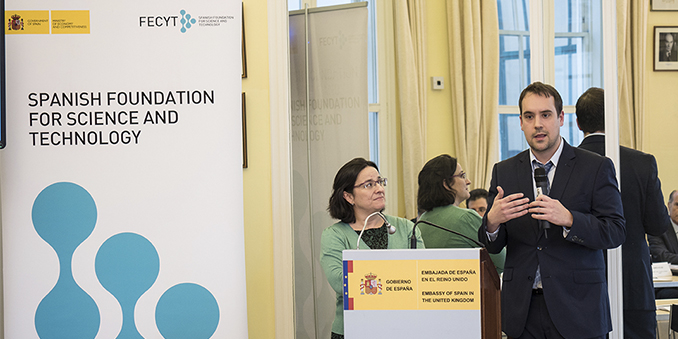 How can their own fields interact with each other?
María, who has a long career as a diplomat, said “Jose’s good will has made me to engage with the scientific method. I believe that, sometimes, we diplomats could adopt that aproach or receive scientific advice to carry out our diplomatic activity. Being aware of scientific evidence as well as of analysis reports and case studies can be very useful to improve our task”.

For José, the experience has been very interesting: “I sent my application because I was curious and because I believe that, as scientists, we must develop our communication skills among others”. In fact, the researcher was interviewed by a local newspaper from his hometown (Pego, Alicante). About the interaction between both groups, Jose thinks that “it’s very useful to see how scientific knowledge can improve diplomacy. In the UK, there is a network of scientists providing advice to diplomats and explaining them the scientific facts behind any topic”.

Carlos’s experience has made him be aware of “the reality and impact of those transferable skills that researchers acquire during their training: communication, project management, troubleshooting, working in a multicultural environment, etc.” Carlos also noticed the different sensibilities about Brexit in the political and scientific community: “I enjoyed witnessing how science can bring people closer in such an uncertain and delicate situation as the Brexit negotiation between the UK and the EU”.

Lastly, Lorenzo ensured the need for “further engaging from the embassy with British universities and research centres to promote more opportunities for Science mobility and collaboration between both countries”. He stressed “the importance of schemes such as this one to bring scientific knowledge and diplomatic activity closer. This can promote better science advice from our experts and better public service from our diplomats”.

About “Ambassadors for Science”
“Ambassadors for Science” is organized by the Spanish Foundation for Science and Technology (FECYT) and the Office for Cultural and Scientific Affairs of the Spanish Embassy in London, with the support of the Society of Spanish Researchers in the United Kingdom (SRUK/CERU). This programme fits within the FECYT’s priority lines of increasing science outreach and science culture, and supporting the internationalization of Spanish science. The scheme is a pilot experience with the aim of extending it to other diplomatic missions and even to the Congreso de los Diputados and other scientific institutions in Spain.