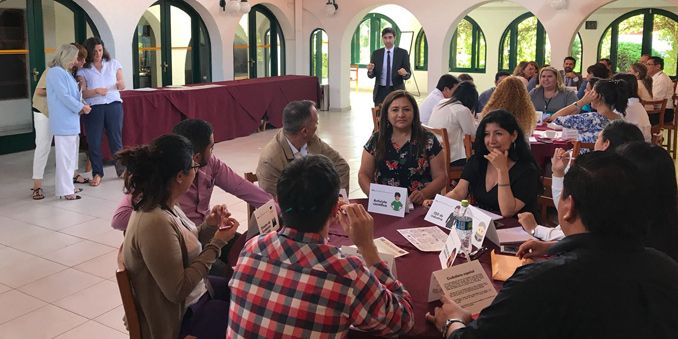 The first Recommendations to promote Science Diplomacy in Latin America and the Caribbean, are published. They were elaborated by participants from 10 countries of the region that attended the first Science Diplomacy Course for public managers of Latin America and the Caribbean (https://www.fecyt.es/en/noticia/fecyt-celebrated-science-diplomacy-course-management-officers-public-policy-latin-america). Through their training in Science, Technology and Innovation Diplomacy (STID) received during four days in the AECID Training Centre of Santa Cruz (Bolivia), between the 11th and the 14th December 2017, the attendees were able to discuss a series of recommendations. This course was organized by the Spanish Secretary of State for Research, Development, and Innovation (SEIDI) in collaboration with the Spanish Foundation for Science and Technology (FECYT).

The recommendations are addressed to four agents identified as essential for the thriving of Science Diplomacy: governments, the academic and scientific sector, the industrial sector and civil society.

First, Governments are recommended to recognise the value of Research, Development and Innovation as a key tool to both provide evidence for policy-making processes and contribute to the economic progress of the country. Importantly, it can also be fundamental to strengthen international collaborations between countries. Hence it is suggested to allocate appropriate funding to carry out these activities as well as to improve the relationship between scientists, policy-makers and civil society. The report also recommends to “advancing” in the idea of an Iberoamerican Research Area, which “would allow the free circulation of knowledge and talent in the region and a higher scientific collaboration between countries”.

Those recommendations targeted to the scientific and academic community also reinforce the message of the need of a bigger engagement and communication between scientists and policy-makers, but also between universities at the national and international level to foster international networks of knowledge. Additionally academic training of researchers should include traininig in soft skills such as communication, leadership, or emotional intelligence. It is also suggested the idea of including the discipline science diplomacy in universities not only as a topic subject to study and do research, but also as a pillar of university policies for their international exposure.

For the private sector, the report recommends that industries should “facilitate the incorporation of researchers and scientists” to increase their innovation capabilities. It also suggests industry should engage in public policy debates and become an authorized stakeholder to better social welfare and development.

STID aims to include science, technology and innovation among the priorities of the countries agenda and facilitate and enrich international relations with the inclusion of scientific topics. In addition, Science advice is key to ensure that political decisions and the design of public policies take into account evidence. It also contributes to solve the most pressing challenges of globalization, such as climate change, pandemics, natural disasters, nuclear proliferation or cybersecurity, relying on scientific knowledge and innovative technology.

Countries are increasingly paying attention to the development of STID strategies. So the attendees of this STID course agreed that this set of recommendations could be very important to open the debate about the topic within the countries of the Latin America and the Caribbean.