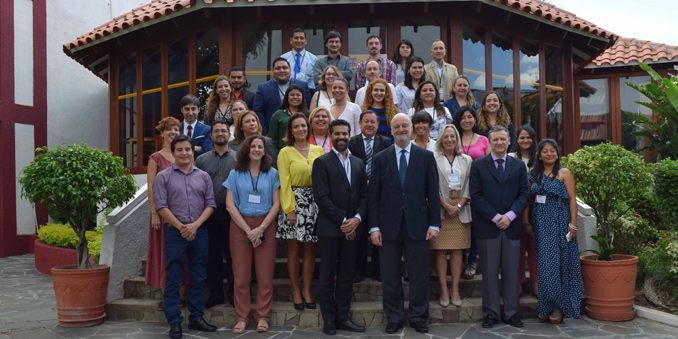 The Spanish Foundation for Science and Technology (FECYT), the Secretary of State for Research, Development and Innovation (SEIDI) and the Spanish Agency for Cooperation and Development (AECID) organized the course “Science diplomacy for management officers for public policy in Latin-America” from the 11th to the 14th December, which was held in the AECID training centre in Santa Cruz de la Sierra (Bolivia).

A total of 25 participants, who were from 11 different countries in Latin-America and Caribe, attended the course. Additionally, a range of international experts in science advice and science diplomacy participated as speakers in the course together with the members of the FECYT International Projects Unit, who were also the main organizers of the course.

Spanish Ambassador in Bolivia Enrique Ojeda and Vocal Adviser to SEIDI Teresa Díez Iturrioz both opened the course welcoming all participants and praising the active collaboration between the Spanish Ministry for Foreign Affairs and Cooperation (MAEC) and SEIDI for the development of Spanish science diplomacy.

The first day focused on the general concept of science diplomacy as well as on a few examples of science policies targeting Latin-America. FECYT science coordinator Ana Elorza introduced the objectives and framework of the course. Whereas Spanish Ambassador Ramón Gil-Casares, current director of the Spanish Diplomatic School, spoke about the main challenges of diplomacy in a globalized world, Marga Gual-Soler, from the Center of Science Diplomacy of the American Association for the Advancement of Science (AAAS), introduced the current global framework for science diplomacy. On behalf of UNESCO, Guillermo Anlló gave an overview of science policies in Latin-America. Teresa Díez (SEIDI) introduced the Ibero-American programme of science and technology for development, known as CYTED. At the end of the day, all speakers discussed with the participants at a roundtable about the main challenges and the future of science diplomacy in Latin-America.

During the second day, the participants learnt about the foundations and basic mechanisms for science advice through different talks delivered by experts in the field: Mara Gual from AAAS, the Deputy Head of the Office for Science at the US Department of State Franklin Carrero, the Head for America in the US Health Department Cristina Rabadán, and FECYT science coordinator Lorenzo Melchor. In the afternoon, the course focused on science diplomacy training programmes such as those delivered by AAAS or by the Spanish Diplomatic School, as well as the FECYT shadowing scheme “Ambassadors for Science”.

The third day was focused on the European Union and the European Research Area, thanks to a talk by the Head of the FECYT International Project Unit Izaskun Lacunza. It also covered the report from the RISE high-level advisory group to the European Commission. Additionally, the Spanish System for Science, Technology and Industry was explained in detail together with the actions in science diplomacy undertaken by MAEC, SEIDI, and FECYT. To bring the day to an end, all participants got involved in a simulation game to seek solutions in a hard Brexit scenario by fostering better international scientific cooperation.

The last day covered the role of the organized civil society in science policy and science diplomacy. The Executive Director of the Association of Spanish Scientists in the UK (ECUSA), Olivia Mendivil, participated in the course. In the afternoon, all participants worked in groups to discuss a series of recommendations to encourage science advice and science diplomacy in Latin-America and Caribe. These recommendations will be published shortly.

Different roundtable sessions were held during all these days, with all participants getting heavily involved in the discussions. All attendees were empowered, thanks to the received training, to maintain and reinforce this thriving network of management officers for public policy in Latin-America through joint actions in the coming future.