Investing in science is worth it! 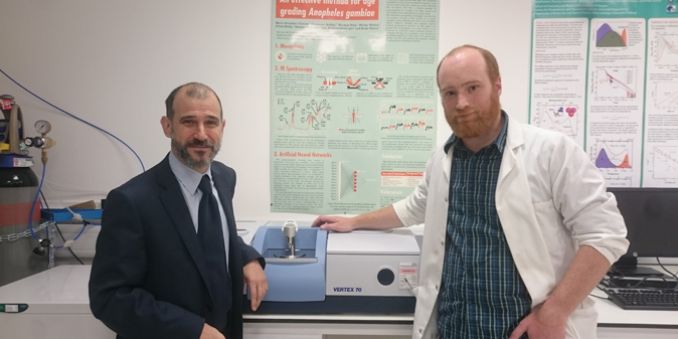 The Spanish Consul in Edinburgh Miguel Utray and the postdoctoral researcher in the University of Glasgow Mario González Jiménez worked together in this scheme.

On the 24th June, with the election hangover of the EU referendum, Mario visited Miguel in the Consulate of Spain in Edinburgh. There, he lived the process of Spanish General Elections 26J, witnessing how votes were split by electoral constituencies (a total of 2,084 votes were counted) and the shipping by diplomatic pouch. In fact, Mario was very keen to learn first-hand about how to prepare a diplomatic pouch.

On the 28th June, Mario also went with Miguel to the “Astronomical Telescopes + Instrumentation” conference, organized in Edinburgh by SPIE, the most important scientific organization in the field of light. There, they met different Spanish companies that showcased their astronomical instrumentation. Of note, most of these startups had grown in the surroundings of the Institute of Astrophysics of Canarias.

Miguel’s visit to the University of Glasgow took place on the 5th July, after a breakfast with the Scottish Prime Minister and other European consuls to discuss about the EU referendum result. In his visit to Mario, Miguel walked through the university facilities and the Faculty of Chemistry. He met with the Department of International Relationships and even had the time to run, guided by Mario, some experiments about chloroform spectroscopy.

Miguel Utray and Mario González are interviewed about their experience together. Video kindly provided by the University of Glasgow

Mario was very thrilled about his visit to the astronomical exhibition. He highlighted that there were some Spanish companies worldwide recognised, but “there were also other small companies, new ones, which have been created thanks to the effort of scientists and engineers that had become entrepreneurs”. According to his own words, “these are companies that are fostering a knowledge-based economy in places where this model is not common at all. Because of this, we both realised that investing in science is worth it!”.

Miguel said that his experience in the lab made him feel like being 15-years old again. His visit and meeting with the university were both very useful, as he also discussed numbers in terms of mobility of scientists and students between countries, the teaching of Spanish and a potential collaboration with the Instituto Cervantes. Mario was pleased to see “science diplomacy in action thanks to the interest of both Miguel and the university to foster potential collaborations between Spain and the university, collaborations that were not only of scientific nature, but also related to the use of Spanish”.

Mario and Miguel praised “Ambassadors for Science” because it gave them the opportunity of both learning from each other, and realizing how difficult and worth it each of their jobs was. Miguel stated that “this exchange has been highly productive to opening new venues of diplomatic collaborations”. Mario said that “we hope this serve both groups, scientists and diplomats, to become useful assets to promote the image of Spain as a country of Science”.

Click here to listen Mario González during his talk in the last session of “Ambassadors for Science”.