“The growing Spanish export of technological products is key” 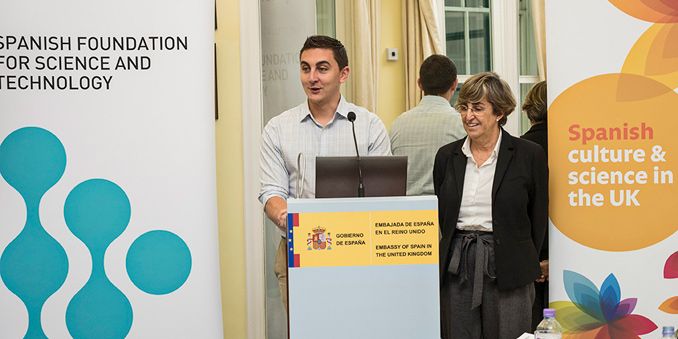 Josefina Beltrán, commercial attaché of the Economic and Commercial Office of Spain in the United Kingdom; and Lorenzo de la Rica, postdoctoral researcher in Queen Mary University London, were paired together in the scheme.

On the 23th June, Lorenzo visited Josefina in the Economic and Commercial Office, where she told him about their work to support Spanish companies in their processes of internationalisation and exportation. Lorenzo, thus, attended an informative meeting with startups and business incubators from Valencia, as well as experts in FinTech and capital risks. Lorenzo, who is from Salamanca, was also able to talk to the delegate from Castilla y León, who is in charge of the promotion of businesses from this autonomous community and that are mostly based on food and agriculture.

On the other hand, on 7th July, Josefina visited Lorenzo in his lab at Queen Mary University London. She saw the facilities and labs, made some experiments, and met with other Spanish researchers. She also visited the university science outreach centre: “The Centre of the Cell”.

Lorenzo highlighted from his experience the “endless support services that the embassy offers to Spanish companies” and that exportation of wine and agriculture products plays a key role in Spanish economy. Having said this, the commercial attaché explained him that products such as orange or wine were both the main export 40 years ago, but that “technology is having a growing influence nowadays, as Spain is exporting tech products and industrial components of importance, for instance, for the automotive industry”.

Josefina valued her visit to the university and thought highly of the committed endeavour in research required to tackle human diseases such as cancer. She also stressed the prominence given to promotion of scientific education. Lastly, she noted the high internationalisation of British universities and its influence in scientific research.

According to Lorenzo, “science is already an international endeavour” and he valued the recent actions of the Embassy of Spain to promote the Spanish science and technology system: “more initiatives, such as the FECYT participation in NatureJobs Careers Expo, are needed to increase visibility of science in Spain”. Lorenzo also found that “incorporating someone with scientific and technological knowledge within the Economic and Commercial Office would be highly beneficial to boost the support to biotech companies”.

Josefina focused her final remarks on improving education and internationalisation of Spanish universities, by attracting foreign students and researchers: “If Spain has been able to do this in the Business School sector, which has three schools out of the top-ten in the world, we should be able to accomplish this with our universities”. Josefina lastly said that “the growing export of Spanish tech products is key for the country, and the Spanish Economic and Commerce Offices throughout the world are already focusing on this”.

Click here to listen to Lorenzo de la Rica and Josefina Beltrán during their presentation in the last session of the scheme.