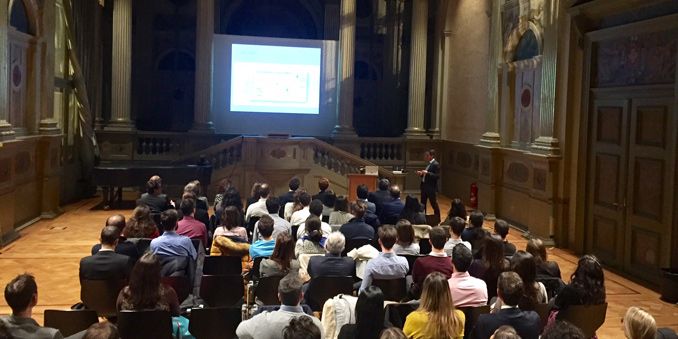 The public presentation of the Society of Spanish Researchers in Swizterland (ACECH) took place in the Swiss Federal Institute of Technology (ETH) in Zurich on November 15th. The goal of the meeting, attended by around 90 participants, was to introduce the association to the Spanish researchers´ community in Switzerland.

The event was inaugurated by the President of the University, Prof. Dr. Lino Guzzela, who highlighted the value of researchers´ mobility for the institution, together with the good number of joint projects between the ETH and different Spanish institutions.

Later, the Ambassador of Spain in Berna, Ms. Aurora Díaz-Rato Revuelta, congratulated the Spanish researchers involved in ACECH, and noted how important civil society associations working for the common good of society are. Also, the Ambassador offered to continue with the support and collaboration with ACECH.

Raimundo Pérez-Hernández y Torra, director of the Fundación Ramón Areces devoted his talk to explain the aims of the Foundation and to highlight its collaboration with a number of Spanish Researchers Societies abroad, working together in strengthening scientific collaborations and in supporting the work of Spanish researchers throughout the world.

Izaskun Lacunza, from FECYT, explained how the Foundation is working in making the Spanish system for science and Technology more international, supporting the visibility of the work performed by Spanish researchers, and in fostering the scientific collaboration with strategic countries. Within this framework, FECYT has a fluent collaboration with the Societies of Spanish researchers abroad in those projects of common interest such as scientific meetings and symposia, mentoring programmes and European projects to foster researchers´ careers. FECYT showed its interest in collaborating with ACECH.

Also, Eva Ortega, Vice-President of the Spanish researchers in Sweeden Society, presented the society´s work, objectives and collaborations. The dissemination and communication of the work of its members, the fostering of scientific collaboration among both countries and the establishment of the association as a key agent in the scientific policy discussions are at the core of their goals.

Pablo Sinues, from the University Children´s Hospital Basel presented the Society to the audience and explained its main objectives: scientific outreach, fostering professional networks, representing its members´ interests to the Spanish and Swiss scientific stakeholders and fostering scientific collaborations among both countries.  The Executive Board was also introduced and Pablo acknowledged the support of the Spanish Embassy in fostering the meeting, identifying a very good number of Spanish researchers in the country and supporting with the legal requirements to create the society.