The second edition of "Ambassadors for Science" starts in London 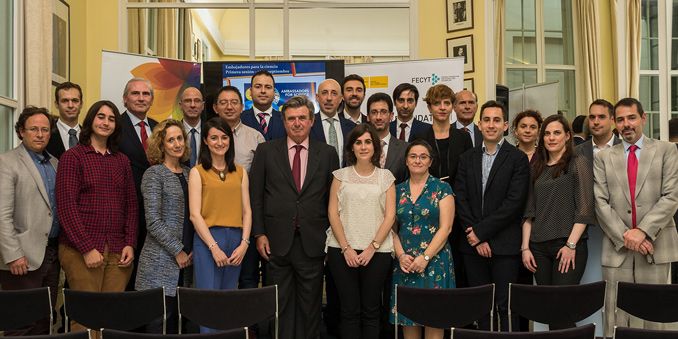 Last 28th and 29th September, ten scientists and ten diplomats who were selected to participate in the 2nd edition of “Ambassadors for Science” gathered in the Spanish embassy in London for the first of the programme sessions.

Last 28th and 29th September, ten scientists and ten diplomats who were selected to participate in the 2nd edition of “Ambassadors for Science” gathered in the Spanish embassy in London for the first of the programme sessions.

The Ambassador of Spain to the United Kingdom, Carlos Bastarreche, made the official opening acknowledging that this year call had caused interest in the scientific community, as the number of applications almost duplicated.

After the presentation of each couple part of this year edition, there were a series of informative seminars. First, Jose María Fernández López de Turiso, minister counsellor of the Spanish embassy in London, gave a talk about the diplomatic career and activity in the Foreign Ministry, as well as in embassies and consulates. He also remarked the most significant challenges for diplomacy in the current days, such as globalization and digitalization.

Next, Izaskun Lacunza, Head of the International Projects Unit in the Spanish Foundation for Science and Technology (FECYT), gave an overview about the world of science and the researcher career within the European and National framework.

FECYT Science coordinator in London and programme manager, Lorenzo Melchor, introduced the concept of science diplomacy and spoke about the most recent Spanish actions in this field.

Lastly, Nerea Irigoyen, Director of International Relations in the Society of Spanish Researchers in the United Kingdom (SRUK/CERU), presented the role of this association as an additional stakeholder in public science diplomacy.

During the second day, they could listen to international experts talking about different science diplomacy approaches. On the one hand, Chief Scientific Advisor to the Foreign Commonwealth Office, Robin Grimes, talked about the UK science diplomacy and the different mechanisms of science advice in the United Kingdom. On the other hand, Aniko Dobi-Rozsa, science attaché of the Hungarian embassy in London and Chair of the London Diplomatic Science Club (LDSC) introduced the activity of this club of science counsellors and attachés, which has been running in London for 19 years.

The last seminars focused on the borders between science and policy, and science and diplomacy, and the professionals that are required to work in the boundaries of both worlds. Lorenzo Melchor introduced the concept of the “social contract” for science, whereas Gonzalo Ordoñez-Matamoros, Associate Lecturer in the University of Twente, explained how knowledge should be embedded in the design of public policies at the European level.

To bring this first session to an end, scientists participated in a simulation game where they roleplayed different social and government stakeholders to seek solutions through scientific cooperation given a post-Brexit scenario.

This second edition has established the following pairs:

In the next three months, members of each pair will visit each other in their working place. In January 2018, there will be a final joint session where everyone will share their experiences.