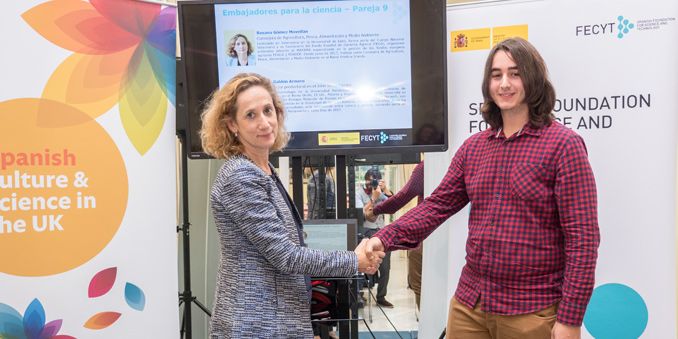 In November 2017, the 2nd edition of “Ambassadors for Science” was launched with ten groups of scientists and diplomats. These participants shared a number of days to get exposed to each other professional worlds. In February 2018, they shared their experiences during the last session.

One of these couples was composed by Rosana Gómez-Movellán, Counsellor for Agriculture, Fishing, Food and Environment, and Javier Galdón-Armero, PhD student at the John Innes Centre.

On 13th November, Rosana visited the research centre where Javier works. They started the day by meeting Prof George Lomonossoff, from Leaf Expression Systems, a company that produces proteins and natural products. Later, they met with Mike Ambrose and visited the Germplasm Resource Unit, a place wherethe seed bank is treated and disseminated across the UK and the globe. At lunchtime, they gathered with Spanish researchers in the John Innes Centre, and later they met with its Director, Prof Dale Sanders, and with the Head of Policy and International Relations Christopher Darby. In the afternoon, Elaine Barclay showed the electronic microscope. Rosana ended up visiting the greenhouses from the research centre.

On the other hand, Javier visited London on the 16th November. They first went to Brindisa, one of the main importers and distributors of Spanish food products in the United Kingdom, where they met with the person responsible of food quality. Later, they attended the European Pizza & Pasta Show, which was also attended by the British Minister for Environment, Food and Rural Affairs George Eustice. This exhibition was part of the 40th anniversary of the Pasta, Pizza and Italian Food Association. The day came to an end with a film screening in the BAFTA headquarters organized by the European Nature Trust. The screening of the short-film “Cantábrico” and the event aimed both to raise awareness of the brown bear in the area as it is an endangered species, and to promote food and gastronomy in the North of Spain.

Both Rosana and Javier note that bringing both worlds closer is essential for all potential collaborations that could thrive. Javier even declared: “Ambassadors for Science has helped me to understand the role that scientists can play within public institutions and how Spain has done and is developing science diplomacy with great success”.

According to Javier, “food production and food sustainability for the global population is probably the biggest societal challenge that we are currently facing”. This is because he upholds that “research in agriculture is going to be essential to determine the different action frameworks of many countries”.  His collaboration with Rosana was as productive as to publishing an article in El Ibérico, one of the reference newspapers for the Spanish-speaking community in London.

Rosana’s opinions were very similar: “My diplomatic activity can help not only to disseminate the research currently undertaken in my field, but also to bring closer both countries by promoting information exchanges and fostering scientific collaborations”.