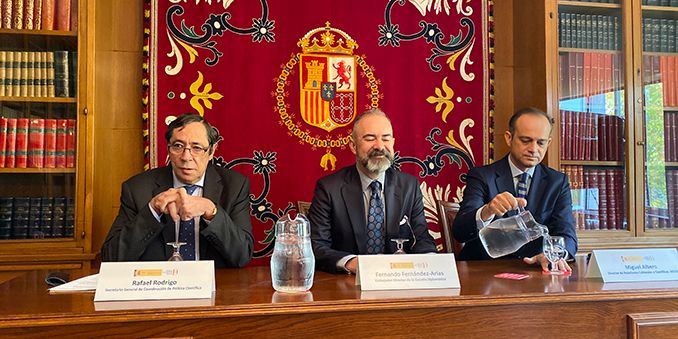 On October 29 and 30, the Spanish Foundation for Science and Technology (FECYT) collaborated, together with the Ministry of Science, Innovation and Universities and the Spanish Agency for International Development Cooperation (AECID), in the organization of the first workshop on science, technology and innovation diplomacy that was held in the Spanish Diplomatic School for the 32 new career diplomats - 71st cohort.

In addition, FECYT presented to the diplomats the project “Using science for / in diplomacy for addressing global challenges-S4D4C” on European science diplomacy, in which FECYT participates as a partner to connect the different agents involved in science, and diplomacy and creating training material.

The conference was opened by the Secretary General of Coordination of Science Policy, Mr. Rafael Rodrigo, the Director of Cultural and Scientific Relations of AECID, Mr. Miguel Albero and the Ambassador - Director of the Diplomatic School, Mr. Fernando Fernández Arias. All of them stressed the importance of the inclusion of science and technology as a fundamental element of Spanish foreign action.