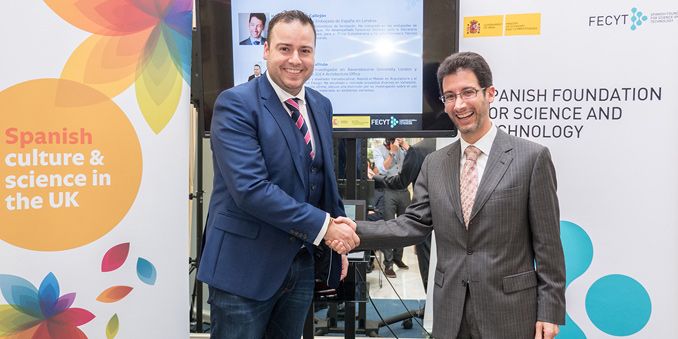 In November 2017, the 2nd edition of “Ambassadors for Science” was launched with ten groups of scientists and diplomats. These participants shared a number of days to get exposed to each other professional worlds. In February 2018, they shared their experiences during the last session.

One of these couples was composed by Héctor Castañeda Callejón, First Secretary of the Embassy of Spain in the United Kingdom, and Alberto Villanueva Galindo, Associate Lecturer and Researcher in the Ravensbourne University London, and founder of IDEA Architecture Office.

Alberto visited Héctor at the Spanish Embassy in London several days. First, Alberto attended an informative session to Spanish citizens in the United Kingdom regarding the impact of Brexit on their labour rights. Alberto was amazed with the fact of that “any citizen can have an easy access to this kind of events”. In another visit, Alberto and Héctor both discussed about the mission of the Embassy passing by most of their offices and talking to staff. Lastly, Alberto also learned about the special service of the Embassy called “Ventanilla Única para el Brexit”.

On the other hand, Héctor visited Alberto’s university. At first, Héctor was surprised because of the building design belonged to a Spanish studio. Once inside, he visited the printing room and 3D scanner; TV, images and sound filming studios; and different libraries and multipurpose rooms. They had a meeting with the university admission officer, who told Hector some facts about the country of origin of students. During the day, Héctor also enjoyed an augmented-reality experience provided by DoubleME; he had lunch with two start-up workers; and visited the urban and sustainable project in the Greenwich peninsula developed by Knight Dragon, that also includes a key design by Spanish architect Santiago Calatrava.

Both participants thought that the experience was very enriching. Héctor emphasized that Ambassadors for Science has allowed him “to have a first contact with the world of Spanish scientists in the United Kingdom. I knew neither that there were so many here nor that they had such a high level and reputation among their peers and sectors”. More particularly, he noticed the existence of “an interesting example of symbiotic relationship between university and start-ups”. Lastly, on a personal level, he was very pleased to have met his scientific companion Alberto.

Alberto pointed out that he had been able “to understand not only the mission of an embassy and a consulate, but also the key role that national and international relationships play in general”. He also thought that Ambassador for Science “has broken down some prejudices that citizens usually have regarding this kind of institutions”. He said he has witnessed “the big effort and commitment from these engaged professionals in their daily routine, everything for the benefit of Spanish citizens abroad”.

Alberto mentioned that “the possibility that the political system of a country could work together with scientific experts can well determine the quality of the taken political decisions”. This is why he supported the notion that “if we are not able to establish connections and suitable collaborations, we won’t be able to progress”.

Héctor learnt a similar lesson for his professional field. He ensured that “in an increasingly complex world, diplomats and policy-makers have to consider the contributions made by science, so the decision-making process is better informed”. After his experience in “Ambassadors for Science”, he also declared “this has raised my awareness of the important dimension of the Spanish presence in the United Kingdom, an element worth of being proud of and of being further supported and promoted!”