Brexit and Science met up in “Ambassadors for Science” 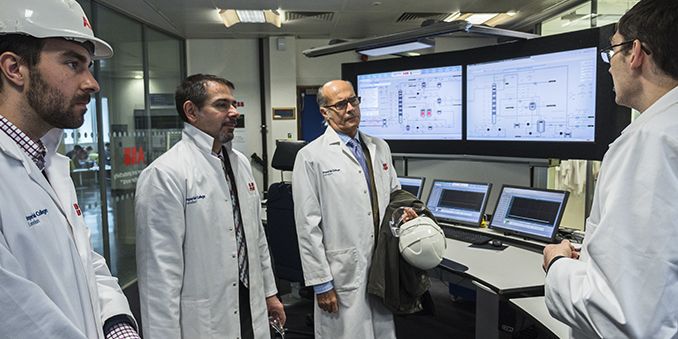 One of these couples was composed by the political counsellor of the Spanish Embassy in London Juan Duarte and PhD Student in Imperial College London Sergio Pérez.

How did their visits go?
Out of all “Ambassadors for Science” experiences during the two editions of the scheme, this has been the most prolific one as both parties visited each other almost ten times.

Sergio visited the Spanish Embassy in London in many occasions to learn about the different departments and the role of Juan as a diplomat. He also attended the Spanish National Day Ceremony and an informative meeting with the Spanish Chamber of Commerce. During the latter, Juan and other officials from the embassy reported about the process of Brexit. Likewise, and thanks to Juan, Sergio was able to participate in meetings with the UK Home Office to give advice regarding the effects of Brexit in the Spanish community.

On the other hand, Juan visited Imperial College London twice. In his first visit, he met with officers from the International Relations Office, with renowned scientists and with Spanish PhD students that told him about their research projects in lay terms. In his second one, he visited the new White City Campus, located in the North-West of London. This campus aims at fostering the free exchange of ideas between students, academics, entrepreneurs, big companies, and society to create spin-offs and start-ups from the university.

What have they learnt?
This exposure to the scientific world made Juan to “admire the close and multidisciplinary cooperation present in research labs between engineers, chemists, physicians, biologists, etc. from all over the world”. He also was very surprised because of “the connection between an university such as Imperial College London with the society and the districts surrounding it. It’s impressive what they are doing in White City to develop research projects and citizen science with the support of their neighbours”.

For Sergio, this experience has allowed him “to humanise diplomats and to witness how they solve practical questions to citizens”. His time spent with Juan in different meetings gave him the opportunity to witness how “communication and mutual dialogue both help building common goals”. Sergio stressed out “the growing presence of science in Spanish companies”, a feeling that he got from the people he met during the Spanish National Day Ceremony.

How can their own fields interact with each other?
Juan noted the close nature between scientists and diplomats because “both are professionals who usually develop their careers in different countries and are continuously exposed to an international environment”. After his time in the labs, Juan concluded that “diplomacy could benefit from more horizontal collaboration and less rigid hierarchies; this could tackle issues in creative ways as it happens in the best international and multidisciplinary scientific research teams”.

Sergio said “I was able to develop further my skills in science policy and science diplomacy, thanks to all the introductory seminars, the experts I’ve met and the time spent with Juan”. Since Juan is the Spanish diplomat who is directly involved in Brexit topics and runs the service of ventanilla única for Spanish citizens in the UK, Sergio learnt about the ins and out of the process of the UK leaving the European Union, the Brexit negotiations, and the impact that this could have on European citizens. In fact, Sergio published an article in the Imperial College science magazine “I, Science”, where he explained the Brexit negotiations and its likely impact in the scientific world. Lastly, Sergio hopes to be able to apply all this acquired knowledge in his new role as Director of Science Policy of the Society of Spanish Researchers in the United Kingdom (SRUK/CERU).

About “Ambassadors for Science”
“Ambassadors for Science” is organized by the Spanish Foundation for Science and Technology (FECYT) and the Office for Cultural and Scientific Affairs of the Spanish Embassy in London, with the support of the Society of Spanish Researchers in the United Kingdom (SRUK/CERU). This programme fits within the FECYT’s priority lines of increasing science outreach and science culture, and supporting the internationalization of Spanish science. The scheme is a pilot experience with the aim of extending it to other diplomatic missions and even to the Congreso de los Diputados and other scientific institutions in Spain.