“Ambassadors for Science” explored how to bring university and industry together 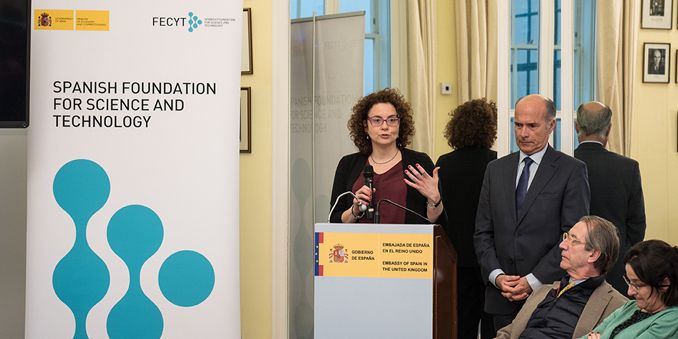 One of these couples was composed by the commercial counsellor of the Office for Economics and Trade of the Spanish Embassy in London Jose Ramón del Valle Portillo, who is an engineer in agronomics, and Sandra Esteras-Chopo, a biochemist who had done research on neurodegeneration but now works as Corporate Partnership associate in the Imperial College London Enterprise Unit.

Thanks to her work in tech transfer and her participation in “Ambassadors for Science”, Sandra started to getting exposed to the activity of the Spanish Offices for Economics and Trades in one of her trips to Japan. She attended a reception organised by ICEX on 12th October 2017 within the framework of BioJapan. Months later, Sandra visited Jose Ramón in the ICEX office in London on 12th December. Sandra attended different work meetings and, guided by the commercial counsellor, she witnessed how ICEX not only supports Spanish SMEs in their internationalisation attempts to access the British market, but also provides contacts to Spanish investors in the country. One of their main aims is also the promotion of the national brand ‘Marca España’ via different products in British festivals and fairs.

Jose Ramón visited Imperial College London twice. On the 8th November 2017, he visited the South Kensington Campus and learnt about the research done by Spanish scientists in the university. His second visit took place on 2nd February and he was exposed to the brand new White City Campus: a new £3bn  development in the North-West of London where Imperial College London aims at facilitating both the development and growth of their spinoffs and start-ups, and the free exchange of ideas between students, scientists, entrepreneurs, big companies and society. Jose Ramón visited facilities such as the Translation and Innovation Hub or The Invention Room, created to foster those interactions between all kinds of stakeholders.

Sandra found her visit to ICEX very stimulating, as she learnt the kind of activities that the Spanish Public Administration strives to perform “to give an international push to Spanish gastronomy that would impact positively on the Spanish economy”. Sandra acknowledged “the great multidisciplinary team in these offices that is able to cover such a wide range of products from food and wine, to tiles and construction materials, including also high-tech products”. Last, Sandra was thankful for “this fantastic opportunity to get familiar with a concept that I knew nothing about: science diplomacy. I now believe science diplomacy is key for the global positioning of a country”.

Jose Ramón considered his involvement in “Ambassadors for Science” as “a fascinating experience”. For him, “it has been excellent to get in contact with the state-of-the-art science and engineering”. He found his interaction with Spanish scientists in Imperial College London highly useful: “they presented their scientific and research projects in a lay language, and I have no doubts their results will have a fundamental social impact”.

When Jose Ramón visited the White City Campus, he understood “how the British scientific community is highly committed to bring universities and companies together, to foster better interaction, partnership and mutual understanding. Perhaps we should promote this talent and knowledge circulation between university and industry in Spain too”.

For Sandra, her experience has made her think more about “how to ensure the presence of more Spanish universities and companies in scientific festivals and international tech fairs where ICEX participates. We could then explore how to establish strategic partnerships between Imperial College and Spanish universities or companies”. Likewise, she stated that “science diplomacy will help to better bring science and society together, and so, we, scientists, must get involved actively in both science diplomacy and outreach”.