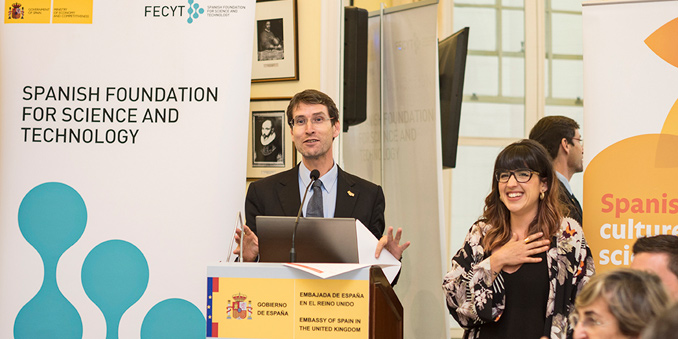 Gonzalo Capellán, Spanish counsellor for Education in the United Kingdom, and Cristina Villa del Campo postdoctoral researcher in the University of Oxford, were paired to work together in this scheme.

Cristina went with Gonzalo across different cities in the UK on the 17th and 18th May. On the first day, they visited the St Cuthbert’s Primary School and the Broughton Hall Catholic Secondary School, both in Liverpool. There, Cristina attended classes of different subjects such as Physical Education, Mathematics, and Geography and History, all of them given in Spanish thanks to the CLIL approach (Content and Language Integrated Learning).

On the 28th June, Gonzalo visited the Department of Physiology, Anatomy and Genetics in the University of Oxford, where Cristina does research on cardiovascular regeneration. Gonzalo put on a lab-coat and experienced a researcher’s usual day working on cell culture and carrying out an immunofluorescence experiment.

Cristina described her experience as “very enriching, because I have seen how the CLIL approach works. I have been also exposed to the different activities of the Spanish Education Office, which are very useful for the dissemination and promotion of Spanish language and culture”.

On the other hand, Gonzalo’s experience in the lab made him gain “full conscience about all the time and resources required for each experiment in research”. At the same time, this experience made him notice that researchers in the fields of sciences and humanities both operate with the same approach: identifying a problem first and then testing different hypotheses through experimentation. Gonzalo used the following question to illustrate his reasoning: “Why in Spain, with so many hours of English teaching lessons, do we speak the language so insufficiently? Because the classic approach is mostly focused on the teaching of grammar, this approach hinders developing other essential communication skills. Conversely, the CLIL method has revolutionised language learning methods because it allows learning a new language, without the need to focus on the grammar, at the same time that you teach another subject”.

Cristina emphasised the importance of education and that scientists need to visit schools and engage with the general public. Gonzalo concurred and spoke about “Science in the Classroom”, an initiative run by the Spanish Embassy in London and FECYT, in which Spanish scientists visit a school to tell students about their job and the influence that science has on their daily routine. According to Gonzalo, “if students already think in these terms from their time at school, whenever they are adults, diplomats or politicians, nobody will have to make them aware of the importance of research and science”.

Gonzalo concluded with two remarks. First, “we have to break down certain conventions about self-contained knowledge subjects, and so, those who work in education would need to work towards a higher porosity between sciences and humanities”. Second, “we have to think out of the box we work in; it can be either in the lab, in tourism, in education, in culture or in politics, but it is good to think out of the box and see what is going on beyond our borders, to have a glimpse from our ignorance, and to strive to have a more comprehensive view of the complex world we live in”. Precisely, Cristina expressed her gratitude because this experience has given her “the opportunity to go out of the lab and explain my job to the general public, at the same time that I noticed other ways to do research”.

Click here to listen Cristina Villa’s speech during the last session, or here if you want to listen Gonzalo Capellan’s presentation. Audio is only available in Spanish.