Prevention and treatment of drugs addiction in “Science in the Classroom” 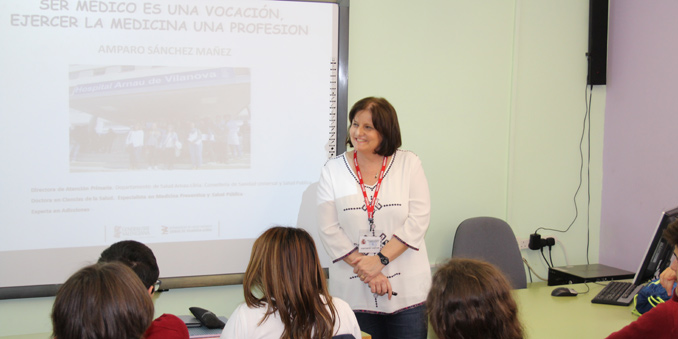 Being a Physician is a vocation, practicing Medicine a profession

Amparo started her talk with the aim of, in her own words, “provide a wide perspective of Medicine from the overall General Practice to other intervention fields such as Humanitarian Medicine or Public Health Care”. Thus, Amparo used her own life experiences to illustrate how Medicine comprises diagnosis, prevention and treatment of diseases.

As an expert in addictions, Amparo highlighted that “addicts must be treated with dignity and in the same conditions than any other patient” and she explained how Drug Regional Plans work in the prevention area.

Drugs are “deceivers” tricking on your brain

The physician explained the basic mechanisms by which drugs, and in special marijuana, work in the teenage brain, altering its normal development and being able to cause addiction issues. Quotes such as “4 out of 10 people who begin drinking before being 15 years-old, become alcoholic”, “1 out of 11 people who use marijuana turned addicted” or “each year, over 53,000 students become addicted to cannabis”, all triggered questions and discussion among students.

According to Amparo, “I was surprised by their attention level, curiosity and spontaneity. I liked that they did not feel uncomfortable when asking their doubts and sharing their opinions”.

Lastly, she spoke about the adverse consequences of marijuana use and the secondary effects of its addiction. She also described its medical use in specific cases and with regulated dosages.

Psychoeducation in the prevention context

Amparo reckoned that this talk at such a crucial age validates the “need to intervening earlier in the educative plan and delivering psychoeducation in drug use prevention. This is because providing information of how drugs affect the brain and how addiction works does help students to take their own free and informed choices at the time of using or not using drugs”.

For Lorenzo Melchor, organiser of “Science in the Classroom” and FECYT science coordinator at the Spanish Embassy in London, “Amparo shared plenty of information about drug addiction in such an understandable way that she covered from its biology and brain changes to its medical and social consequences and how working in prevention is worth it. I think it was a very enriching talk for students”.

According to Vicent Borredà, teacher of Biology, “Amparo got along very well with students; she made them think not only about that being a physician is more than just general practice, but also about the harm of drug use during adolescence.  One of her phrases stuck in my mind: ‘even though we understand that teenagers are curious to try new things, we strongly recommend that you delay this as much as possible, at least until being 20 years-old or even never in your life, if it is possible’”. When asked whether these messages had permeated in students’ mind, Vicent replied “this talk has not fallen on deaf ears among our students”.

Amparo thanked her experience in “Science in the Classroom” describing it as “an attractive way to both show different knowledge fields ant give professional advice to students. The methodology of delivering sessions to different educative levels allows not only to strengthen any educative action about a specific aspect, but specially to achieve a high-level of participation in students”.

Amparo finished her Medicine Degree in the University of Valencia in 1983. She is a Medical Doctor in Health Sciences and specialist in preventive medicine and public healthcare. As an expert in addictions, Amparo has done different actions of Humanitarian Medicine from 1993 to 2004. She works in drug prevention and treatment with a direct contact with addicts and has involved in social campaigns and international forums. From 2006-2009, she worked in the Drug National Plan as a Head of systems of information in addictions. Since 2016, she is the Head of Primary Health Care in the Health Department Arnau-Llíria, Conselleria de Sanidad Universal y Salud Pública (Valencia, Spain).