The five global scientific challenges in “Science in the Classrom” 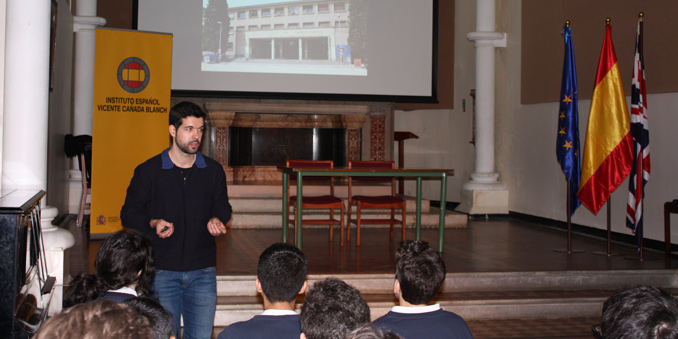 Last 24th February, a new session of “Science in the Classroom” was held in the Spanish School Vicente Cañada Blanch with the participation of Fernando González Zalba, senior researcher in Hitachi Cambridge Laboratory, who introduced the “Five global scientific challenges for future researchers”.

Fostering scientific curiosity as a purpose

The physicist explained his life from his school in Pamplona to his current work at a company in Cambridge, telling everything about his doubts and decisions, and offering advice to students as to how to tackle their immediate future.

His story led him to introduce a survey that he made within the scientific community in Cambridge to identify the five most important scientific challenges. Fernando aimed “to provide students with a global perspective of the most important challenges for humanity; challenges that will likely take plenty of time to get solved and that students could eventually contribute in their resolution”. Students immediately reacted in a positive way. According to Fernando, “I wanted to foster their scientific curiosity in order to encourage them to pursue a scientific career”.

Energy sustainability, the human brain and artificial intelligence, quantum informatics, the cure for cancer and the universe

Fernando took his survey results to reveal each scientific challenge for humanity from the least to the most important.

First, he spoke about the enigmas of the universe such as the nature of dark matter and dark energy, or the search for new planets and extra-terrestrial life. In his explanation, he provided information about the major multinational infrastructures such as Borexino in Italy, IceCube in the Antartic, or CERN in Switzerland. Then, Fernando covered the search for the cure of cancer and other diseases through genomics and personalised medicine. Next, he spoke about the computing revolution with the technological improvement of transistors and quantum physics. With a multidisciplinary approach, Fernando dealt with the discovery of the full potential of human brain and how it can be simulated in robotics and artificial intelligence. Lastly, the scientist introduced as the most important challenge the search for a source of clean and sustainable energy that will help us to prevent climate change from happening. He explained about renewable energies and also about recent experiments in nuclear fusion.

The power of science outreach

Throughout his presentation, students were asking and challenging their own ideas very lively. Fernando was surprised for “their level of participation and their willingness to debate every topic I presented”.

For Lorenzo Melchor, organiser of “Science in the Classroom” and FECYT scientific coordinator in the Spanish Embassy in London, “Fernando triggered students’ curiosity, as they discerned not only how science and technology will provide solutions to current challenges, but also how they can get involved themselves in addressing these issues. It was very special to see students asking questions 45 minutes after the ring bell”.

Fernando reckoned that “science outreach to new generations is essential; if it is done with effort and joy, students will surely value it. It is very gratifying!”

Lucía Buceta, teacher of Technology in the Spanish School Vicente Cañada Blanch in London, said “Fernando’s talk was very interesting and entertaining, in spite of the topics complexity”. Lucía was surprised at seeing “how Fernando engaged students from the very beginning. He used such a positive and interactive approach that connected different science fields with the resolution of common challenges in nature and universe. Many students thanked us for being invited and others asked to repeat”. For Lucia, “Science in the Classroom” is “a great opportunity for students to discover science and come closer to it in a direct, entertaining and educational way”.

For Fernando, “’Science in the Classroom’ is a great initiative. When I was at school, I would have loved to have the honour of knowing first-hand what a science career is about”.