United Kingdom shares its experience in science advice with Spain 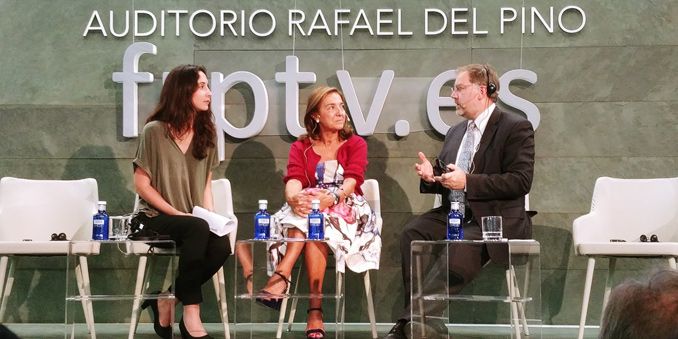 The Ambassador of the United Kingdom in Spain, Simon Manley, and the Spanish Secretary of State for Research, Development, and Innovation, Carmen Vela, both participated on 22nd June 2017 in an event about Science advice in the Fundación Rafael del Pino. Science advice is a service provided to both government and parliaments to tackle global societal challenges such as climate change, food scarcity, cybersecurity, epidemic crises (ebola, zika, etc.) or nuclear accidents (Fukushima).

In his speech, the British Ambassador highlighted the importance of bringing science and policy closer to seek better and new forms of government. Manley underlined the excellent track record in science advice in the UK, stating that the first chief scientific adviser to the Prime Minister was appointed in 1964. From 2002 onwards, a series of chief scientific advisers have been appointed to all government departments. Lastly, he stressed out that governments are required to take into account scientific evidence in order to support and guide their decission-making processes.

Prof Robin Grimes, Chief Scientific Adviser to the Foreign Commonwealth Office, also participated in the event. He explained his role in both putting a scientific agenda on top of the table, and in making sure that scientific evidence influences decision making. Grimes ensured that British citizens have scientists in high esteem and trust; thus, scientific advisers are to be considered an independent figure based on transparency and openness.

In relation to Spain, the Secretary of State for Research, Development, and Innovation, Carmen Vela, declared that science advice in Spain is a wish yet to be accomplished. Vela stated that the Spanish science and technology system is still young and small, but highly efficient when one considers our obtained results. As an example, she referred to Spain being responsible of 3.1% of global scientific production, 4.3% of excellent scientific publications, of 6.7% of publications in the most important journals, and 7.7% of all international collaborations. Additionally she emphasized that the country is obtaining more from Horizon 2020 (10%) than it provides (8%), which makes Spain the second net-beneficiary country in the EU.

Vela mentioned the Advisory Council on Science, Technology and Innovation, a body proposed by the last Law of Science whose aim is to provide science advice to Government and to the Council of Science Policy. She also referred to the Scientific Committee of the State Research Agency as a first embryo of any science advice mechanism in Spain.

Likewise she spoke about some activities aimed to promote science advice in Spain, such as the shadowing pairing scheme “Ambassadors for Science”, carried out in the United Kingdom with the aim of importing it to Spain and the Congress of Deputies in 2018 or beyond.

Additionally, the President of the Spanish Council for Scientific Research (CSIC) Dr Emilio Lora-Tamayo, the Director of Esteve and President of the Fundació Catalana per a la Recerca I la Innovació Dr Antonio Esteve-Cruella, Director of Public Policy in University College London Dr Chris Tyler and Research Director of the Royal Society Dr Jo Dally, all discussed about the future of science advice in a roundtable chaired by Cristina Gallardo, senior editor in Research Fortnight.

All of them underscored the importance of promoting training and engagement between scientists, policy-makers, politicians, etc. as well as raising public awareness for research through better education. This would ensure some commitment from politicians to take better informed decisions in their public service to society.

Gallardo was in charge of bringing the event to an end. She concluded that an effective science advice mechanism must imbue the legislative process with the aim of ensuring that, while drafting and approving laws, the process consider all scientific evidence available at that precise moment.

Likewise she stressed out that science advice mechanisms require not only the active participation of scientific academies, learned societies, private companies related to research and development, universities, researchers, etc; but also the existence of proper communication channels between science and public policy.