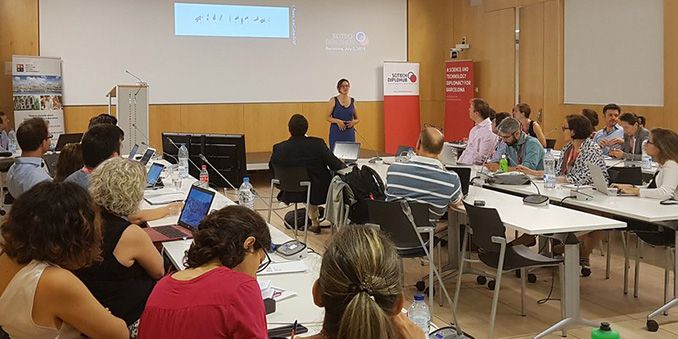 The Spanish Foundation for Science and Technology (FECYT) conducted, acting as partner of the European project “Using science for/in diplomacy for addressing global challenges (S4D4C)”, a role playing workshop about the role of science diplomacy and science advice in the management of a crisis in the summer school of 'Scitech Diplo Hub' of Barcelona.

The workshop was part of the one week program aiming at mid-career researchers, technology experts, diplomats and grad students of science, engineering, political sciences and international relations.  The course aimed at training a cohort of science diplomacy experts with a special focus in Europe, the Mediterranean and the role of global cities in the matter.

The workshop was based on a role playing game that simulated an emergency situation affecting two countries due to a cyberattack to a key national infrastructure of one of both countries. The crisis obliged to create a management working group and to celebrate high level bilateral meetings with the neighboring countries. The students took different roles representing the many stakeholders involved in such a crisis and they tried to reach agreements and solve the different phases of the crisis along the game.

After the simulation, FECYT facilitated a debate with the more than 30 professionals from a number of countries participating in the school in which the role of science advice and science diplomacy in emergencies and crisis, and its interactions with the other dimensions of the crisis was discussed.

This Project has received funding from the research and innovation program of the European Union, Horizon2020 under grant agreement No 770342.