“We should place Science at the same level than politics, culture, economics and trade” 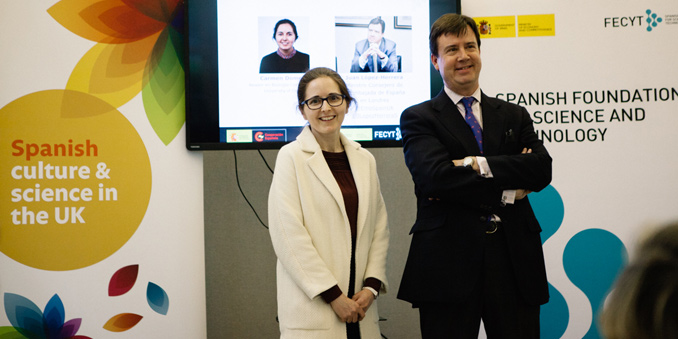 Minister Counsellor of the Embassy of Spain in the United Kingdom Juan López-Herrera and Professor in Chemistry in King’s College London and the University of Oxford Carmen Domene were one of these couples.

On 27th May, Juan visited Carmen at the University of Oxford. He met with Prof Paul Madden, Queen’s College Provost; Prof David Logan, Head of Theoretical Chemistry Department; and Prof Chris Schofield, Head of Organic Chemistry Department. Juan also enjoyed the time in the lab, while he was wearing a lab-coat and doing some experiments. Lastly, Juan visited the Central Administrative Office of the university.

On the other hand, Carmen visited the Spanish Embassy in London on the 30th May. She witnessed how Juan managed the coordination of the different offices in the embassy, as well as the submission of daily papers and telegrams. Since the campaign for the EU referendum was taking place during this visit, Carmen and Juan had lunch together with an Spanish executive who worked in the City and was a supporter of the “Remain” campaign. They all shared opinions about the referendum. To bring the visit to an end, Carmen visited all the offices in the embassy and attended a cultural event in support to the Spanish Theatre Company in London.

For both, “Ambassadors for Science” has been very useful. Juan praised the talent of Spanish scientists in the UK and said that the programme had convinced him of the importance of Science, “we should place science at the same level than politics, trade, culture, etc.”. Meanwhile, Carmen was able to learn first-hand the difference between an embassy and a consulate, as well as their wide range of activities and roles they play.

After this experience, Carmen ensured that “science provides a non-ideological context for engagement and free movement of ideas that enable us to work on global challenges beyond national borders”. For this purpose, she stressed the importance of science diplomacy.

For Juan, this scheme gathers all conditions required to strengthen both public diplomacy and the establishment of networks. First, it provides a stage for a group that is not very well-known to the British and Spanish public, as is the Spanish scientists in the United Kingdom. Second, it allows increasing the network of academic and industry contacts of top level to fostering collaborations. Juan concluded that “Science has to be embedded within our foreign policy in such a natural way as it is already politics, culture, economics, and trade”.

Listen to Juan López-Herrera in his speech during the last session.