“Scientific research is instrumental for a country’s growth” 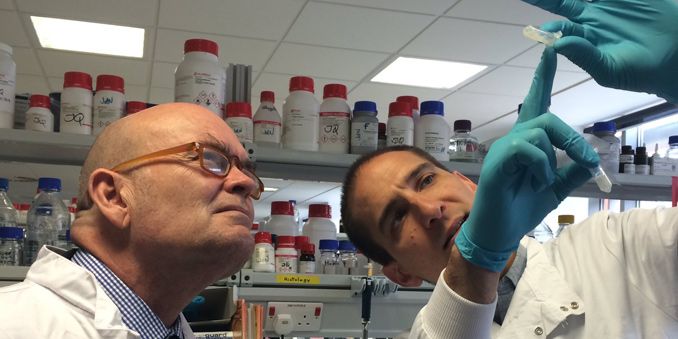 One of these couples was composed by Fernando Villalonga, minister counsellor for Cultural and Scientific Affairs; and Joaquín de Navascués, research fellow in the European Cancer Stem Cell Research Institute of the University of Cardiff. Noteworthy, the University of Cardiff quickly published a piece of news to cover the participation in the scheme of one of its researchers.

Joaquin spent two days in London following the activities of the Office for Cultural and Scientific Affairs. On 13th June, Joaquín went with the FECYT science coordinator of the Embassy, Lorenzo Melchor, to a debate in the Royal Academy of Engineering about the vision for 2030 of science and innovation in the United Kingdom.

On 14th June, Joaquín went with Fernando to the Royal National Ballet, where he met director Tamara Rojo. Joaquín said “I was thrilled to see a Spaniard leading such a British institution that well”. Next, they visited a Manuel Valdés’s exhibition. In the afternoon, Joaquín joined a meeting with all members of the cultural and scientific office and noted “the wide range of activities, the budget management, and the effort and distribution to promoting Spanish culture”. Lastly, in the evening, Joaquín and Fernando attended a rally meeting in favour of Brexit, where they witnessed, as mere spectators, the reasons in support of Brexit.

On the 13th July, Fernando visited Joaquín’s research centre in Cardiff. There, he had a meeting with the Deputy Head Dr Matt Smalley, and checked mouse tumour samples under the microscope. Fernando also put on a lab-coat and Joaquin taught him how to do bacterial DNA extraction and its subsequent analysis in agarose gel. Fernando was also guided through the research centre scientific facilities. At midday, they had lunch together with other Spanish researchers and, afterwards, Fernando visited the School of Modern Languages as well as the Global Opportunities Centre, which have Spanish education programmes for both students and general public.

In regards to the scientific event, Joaquín said he was amazed by “the sense of responsibility and professionality of those scientists that work in science management, but also because the scientific establishment in the United Kingdom has a notable critical mass and together with the support of society, both make it be highly connected with government”. When he was asked about his time in the Office for Cultural and Scientific Affairs, Joaquín highlighted “the office has an important contact network, a multidisciplinary knowledge, and an enabling mission as an instrumental key to project Marca España”.

This multidisciplinary approach and environment of the embassy office was highly in contrast with “the high technique specialization in Joaquín’s lab”, Fernando said. He described the lab environment as “positive, international and young, and at the same time highly meticulous”. Fernando noticed “the huge amount of time and funding that is needed in research” and he concluded that “if one wants to do state-of-the-art research, one needs human resources and funds. Scientific research is instrumental for a country’s growth”.

On the one hand, Fernando stated that “cultural promotion of Spain as a country where good science is done is key”. On the other hand, Joaquín shared his wish “to have a concrete result of all this experience” and the fact that, even though he was not working in Spain, this scheme had helped him to recognise himself as “an important asset for Spain from the United Kingdom”, as he could still provide his experience and contacts through collaborations with his own country from abroad.

Click here to listen to Joaquín de Navascués during his intervention in the last session of “Ambassadors for Science”.