“Scientific advice is important for policy-making” 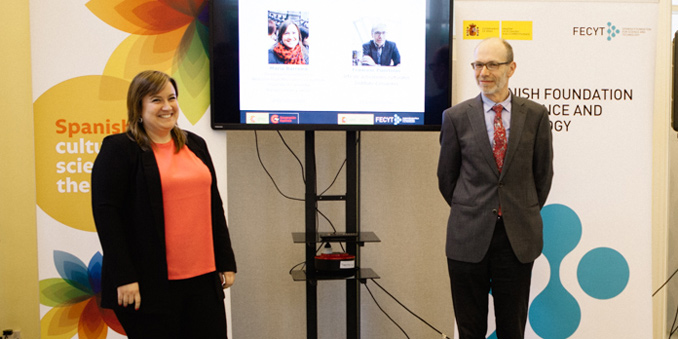 Francesc Puértolas, Head of Cultural Department in the Instituto Cervantes in London, and María Barreira, postdoctoral researcher in the Wellcome Trust-MRC Research Centre in the University of Cambridge, made a pair during this scheme.

María described this couple as composed of “a man of humanities with scientific curiosities and a woman who is a scientist with cultural curiosities”. The experience started with María attending the Instituto Cervantes in London “Open Doors Day” on 18th June. First, the two of them shared their opinions about culture and science, and then they visited the exhibition “Quijotes por el Mundo” and attended the book launch “Piano a cuatro manos”, a book written by Conxa Rodríguez Vives that is about the life of Carlist general Cabrera, who lived exiled in London. In the afternoon, María saw actor Jorge de Juan teaching Spanish students how to recite Ruben Dario in public. Also she attended a Spanish music concert by Iberian Colours.

Francesc visited María in her research centre on 6th July. There, he met with other Spanish researchers who told him about their experiences in Cambridge. Francesc put on a lab-coat and, monitored by María, he carried out mouse genotyping, from the DNA isolation and amplification to the corresponding electrophoresis. María also showed embryo stem cells to Francesc under the microscope. For her surprise, Francesc stated that these reminded him to “Mayan motifs”.

According to María, “it was fascinating to see how the Instituto Cervantes works towards teaching Spanish language and promoting the hispano-latinamerican culture”. This experience was “great to get out of my scientific bubble, see my research from another perspective and find other vehicles, such as language and culture, to communicate my scientific research to society”.

Meanwhile Francesc described his experience in the lab as “the beginning of an odyssey in which I remotely understood the amount of patient and systematic labour that lies behind every scientific breakthrough”.

For Maria, “Ambassadors for Science” has convinced her about “the need for scientists to get out and engage with society to tell them about their knowledge and to advice policy-makers and diplomats specifically about the latest scientific breakthroughs, which most of them may result in the development of technologies or applications that lack proper legislation”. María put as an example the latest genomic edition techniques of embryo stem cells, recently authorized by British institutions after having been informed with scientific advice.

On the other hand, Francesc made a comprehensive review of his contact with stem cell biology and embryo development: “I had an insight of how some transcendent questions about the origin of life, which traditionally are mulled over from the perspectives of fields such as Theology, Humanities and Arts, have an honest and laborious contender in the scientific proceeding; whose tangible results dramatically contrast with the intangibility and subjective interpretation of those of ‘my side’”.

Listen to María Barreira’s speech during the last session (Only in Spanish).