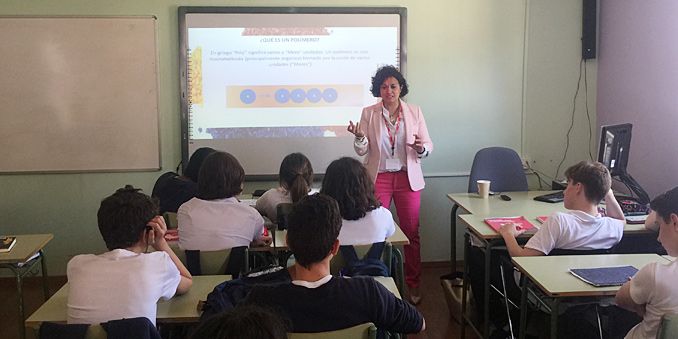 On Friday 26th of May, the “Science in the Classroom” project was once more underway in the Spanish School Vicente Cañada Blanch, in London. On this occasion, students were able to gain an insight into the astonishing world of material sciences, thanks to the Senior technologist in Zotefoams, Patricia Forcen Jimenez.

Everything is science and the importance of continuous training

Apart from showing students that science is a broad field with many professional opportunities, Patricia attempted to show the ways in which everything around us could potentially be used for Science, to do so, she used certain everyday objects can be changed and transformed to serve different purposes, as well as in different fields, like for example medicine or transport.

Patricia decided to focus on three main points that could, potentially, be of interests to the students. The first one, and perhaps the most important one, is that contrary to what most students think, Science is not only something that is solely used in laboratories or academic environments, but rather it is used in a wide range of professions.

This, henceforth, led to her second point which was focused on not only continuing to learn new things throughout your life, but also, that at the workplace it is very common to find a large variety of people from different backgrounds. Patricia stated that it is necessary for companies to have “different types of professionals with varying fields of expertise, as well as being essential for the employees to never stop learning”. By making this statement, she wanted to highlight the fact that it is always important to be able to learn new skills and knowledge not only in your academic life, but also in your working life.

Finally her third point was about trying to get the students to learn the know-how of the process by which different objects are made, like for example spoons or plastic bags. Further, she made students become involved in the creation of a spinner, thus making them think about who was involved and what process were undertaken to create this product.

According to Patricia, students showed a great interest and curiosity in the topic that was being presented to them. Said enthusiasm, allowed her to have an insight into “how the topic was seen and perceived by the future generation, which is not something that you always see in your day to day life”. Moreover, the chemist emphasized how the “students were interested in not just the scientific aspects being talked about, but also about the possible professional options”.

Indeed, Lorenzo Melchor, project organizer and scientific coordinator in the Spanish Embassy in London, acknowledged that “Patricia was extremely successful at capturing the students’ attention, and making them engaged with the industrial process involved in making certain materials, as well as helping them think about what kind of professional background may be necessary to work in any company”.

Cesar Andres Aucejo, one of the teachers in this school, also stated that “students in general, and especially humanities students who are not necessarily deeply interested in science, had become very engaged with the topic that was being presented to them and, despite some complex terminology being used by Patricia, they came up with a number of questions regarding the topic that was being presented to them”. When asked about the most important aspect of Patricia’s visit to the school, Andres replied that “Patricia was successful at showing students how to gain experience in different professional environments and how a spontaneous event in our lives can make us become deeply interested in a particular field”.

Lastly, Patricia acknowledged that “even though science can look like magic as I though when I was a child, it is not really since science allows us to understand the real facts behind each natural phenomenon”. Patricia was thankful to have partaken in “Science in the classroom” since “it enables students to listen to scientists talk about science and at the same time share their experiences, decisions and professional motivations”.

Patricia obtained her PhD with European Mention in Organic and Polymer Chemistry between the University of Zaragoza (Spain) and the Technical University of Denmark (DTU) in 2007. Previously she had acquired international and industrial exposure, first at Procter & Gamble (Belgium) in 2001 where she was selected to participate at its Internship Talent Programme, and second, at Philips (The Netherlands) in 2003 as an 8-months replacement. After her PhD, she immediately started to work in the research field in the Industry sector. She has worked at Sabic as Process Chemist at the Technology and Innovation Department, focused on High Performance Polymers, becoming after some years Lead Scientist. This was her last role before moving to Zotefoams in London in February 2016, where she works in the Technical Department as a Senior Technologist. Zotefoams plc is the world’s largest manufacturer of lightweight cross-linked polyolefin block foams and additionally sells and licenses high-performance products and cellular materials technology for markets as automation, aviation, aerospace, biotechnology or footwear among others. Lastly, Patricia also obtained a Master of Finance Management in February 2014 and she has a deep knowledge of 6 Sigma and Multivariate Analysis.