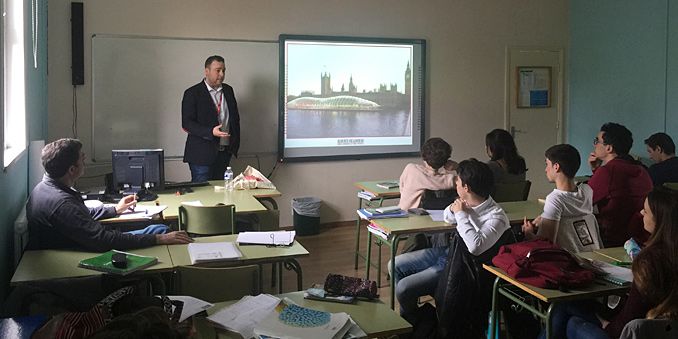 Last 27th April, the Spanish School Vicente Cañada Blanch in London held another sesión of “Science in the Classroom”, delivered by the Spanish architect Alberto Villanueva Galindo, Associate Lecturer and researcher in the University of Ravensbourne and director of IDEA architecture office.

From Earth to Mars

Alberto explained the variety of architecture projects in different cities and countries that he has been involved in from his time at university to nowadays. During his career, he has specialized in new 3D printing techniques, augmented reality and virtual reality.

Students paid special attention when Alberto told them about his project “MARS Utopia”, in which he suggests using architecture as a driving element to make Mars a habitable planet. Alberto showed how a multidisciplinary approach where architecture, 3D printing techniques, geology, biology, and chemistry would interact to develop the ambitious project of inhabiting Mars, and to better illustrate it he brought some scale models to the classroom.

According to Alberto, “I have tried to show them the tools for the future and how industry requires more and more professionals from different backgrounds and disciplines, since an architect can work close with engineers from NASA or do experiments with biotechnologists in the lab!”

Curiosity and determination as values to preserve

Alberto reckoned that “younger students usually react in such an authentic and stimulating way. In my case, that I strive every day to be able to cope with my three professional pillars (teaching, research, and business), it is very rewarding to be able to engage with students in this way and to think that I have inspired them”.

He aimed to deliver three important messages: “First, do not ever lose your curiosity about what happens around you, this curiosity will allow you to collaborate with other professionals to create important tools. Second, be determined and persist in fulfilling your dreams, work in something that you like and that you can feel identified with. Third, do not be afraid of asking and learning!”

For Lorenzo Melchor, organizer of “Science in the Classroom” and FECYT science coordinator in the Spanish embassy in London, “Alberto’s talk showed students how everything that can now be considered as science fiction can eventually become science and technology real facts thanks to those who pursue their dreams and push the frontiers of knowledge”.

According to Lucía Buceta, teacher in Technology, “I describe Alberto’s talk in just a word: inspiration. I enjoyed so much all the projects he showed; although these were impressive, almost unrealistic, they were very well thought. For students, this presentation made them not only think about what things can an architect achieves, but also open their minds to face a more flexible future, full of different opportunities and open to all kinds of professionals”.

To end, Alberto wanted to stress the importance of initiatives such as “Science in the Classroom” because “it gives students the opportunity to witness, first hand and away from text books or from the excess of information in the Internet, not only the endeavour that many Spaniards are able to carry out, but also how universities and industries are nowadays more related than ever”.

Alberto was born in the Canary Islands, he graduated in Architecture after studying in ETSA in Valladolid and Universidad Europea de Madrid. He has been involved in architecture projects related to cities such as Venice, Rotterdam, Seoul or Oporto; where he has collaborated and learnt from top-quality architecture offices such as OMA, Fernando Menis or Nieto Sobejanos Arquitectos. In January 2016, he was distinguished by the Royal Academy of Arts of London as one of the five young architects to take into account due to his project MARS Utopia. Since 2015, he works as an Associate Lecturer and Researcher at the University of Ravensbourne, where he previously obtained a Master in Environment Design. Additionally, he leads IDEA architecture office, a multidisciplinary studio based in London.