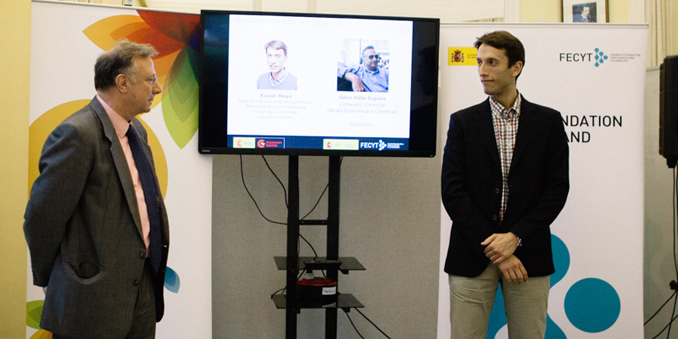 Ödön Pálla, commercial counsellor of the Economic and Commercial Office of Spain in the United Kingdom, and Xavier Moya, Royal Society University Research Fellow in the Department of Materials Sciences and Metallurgy of the University of Cambridge, were paired together in this scheme.

Xavier went with Ödön on the 29th September to the International Cocoa Organisation (ICCO) in London, for a meeting that Ödön acted as Council president. There, Xavier witnessed negotiations between countries and he even suggested presenting in the future one of his studies into the material properties of cocoa.

On the 3rd October, Xavier visited the Economic and Commercial Office, where Ödön explained him the different activities in support of Spanish companies, as well as the possible impact of Brexit in their internationalisation process. At midday, they met with the Director of the Spanish Chamber of Commerce, Igor Irru, and they explored together potential collaborations between Spanish companies and the University of Cambridge. Next, they went for lunch to Iberica restaurant in Marylebone, where Xavier had the opportunity to learn about the Spanish gastronomic investment in the UK and its growth plans. To bring the day to an end, they went together to the Galicia Gourmet Extravaganza fair, where some Galician producers were promoting their gastronomic products.

On the other hand, Ödön visited Xavier in the Department of Material Sciences and Metallurgy in the University of Cambridge on the 1st October. There, Xavier explained his research about the thermal properties of different materials to develop better refrigerators. When Xavier guided Ödön through the traditional colleges and landmarks of Cambridge, Ödön’s academic experience was full. For instance, they visited The Eagle pub, the place where the press announcement for the discovery of the double stranded DNA was made. Xavier used these means to explain Ödön everything about the scientific culture of the town and the main scientific findings there discovered.

Lastly, on 12th November, Ödön returned to Cambridge as Xavier invited him to attend a formal dinner with other fellows of Churchill College. Ödön was able to live one of the most emblematic experiences in the academic life in Cambridge.

Both of them highlighted “how enriching” their shared experience had been, as it allowed them to get exposed to places and situations that they are not accustomed to. Xavier stated he had learnt about all the support given to Spanish companies in their internationalisation expansion, in special to those from gastronomic and hostelry sectors. On the other hand, Ödön valued highly Xavier’s research mentioning that “big companies could be very interested in his research”.

The material scientist said about the scheme, “I have called this experience: the science diplomacy force awakens”, feeling quite proud of having been one of the first scientists to be enrolled in it. He put forward the idea of “creating a forum to encourage continuous exchange of ideas between diplomats and scientists”. Together with Ödön, they recommended to create “a database of academics to serve as expert consultants for Spanish companies”.

Click here to listen to Xavier Moya’s speech during the last session of “Ambassadors for science”. Audio only available in Spanish.