“It is important to instil curiosity in young people” 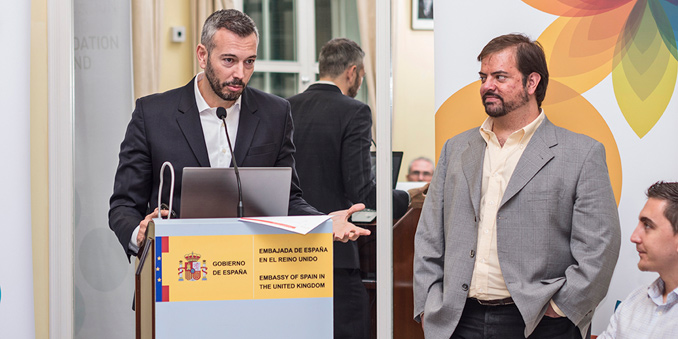 The counsellor of Tourism Enrique Ruiz de Lera and the PhD student of the University of Oxford Fidel Alfaro Almagro was one of these couples.

On the 16th June, Fidel visited Enrique to the Spanish Tourism Office in London, where he met with different experts, and learned about the different tourism campaigns and their impact analysis on the British public. The researcher ended his visit going with Enrique to the “World Tapas Day” festival.

On the 19th July, Enrique visited Fidel’s research centre, the Oxford Centre for Functional MRI of the Brain (FMRIB) of the University of Oxford. Fidel and the manager of Science Outreach explained to Enrique the UK Biobank project, the most ambitious brain imaging study that will analyse 100,000 individuals with 6 different brain imaging techniques to find the first symptoms of diseases or neurological disorders. After visiting the facilities and seeing the equipment of magnetic resonance scanners, Fidel guided Enrique throughout the most important colleges in Oxford.

Fidel said that this experience has allowed him to notice “the importance of the promotion of tourism in Spain to the United Kingdom and the implemented methodology to analyse the projected image of a country”. In regards to his visit to the World Tapas Day, the neuroscientist praised not only the hard work of Enrique and his team, but also their communication skills required to project a strong image of the country.

Enrique stressed the quality of all participants of “Ambassadors for Science”. He praised the important mission of scientists in their daily job that “can change many people’s lives” and concluded that “it is important to instil curiosity in young people, because that curiosity drives you to develop much lateral and long-term thinking”. He also mentioned that Spain needs to protect its intangible assets to better manage its professional talent.

Enrique was very interested in Fidel’s research field precisely because “neuroscience has a border with my expertise, marketing, that is known as neuromarketing”, so he took advantage of his visit to FMRIB to learn more about potential studies in this line that could have been developed in this research centre. On the other hand, Fidel appreciated the value of the existing analytic tools to define the impact of advertising campaigns.

Click here to listen to Fidel Alfaro and here to Enrique Ruiz during their presentation in the last session of the scheme.