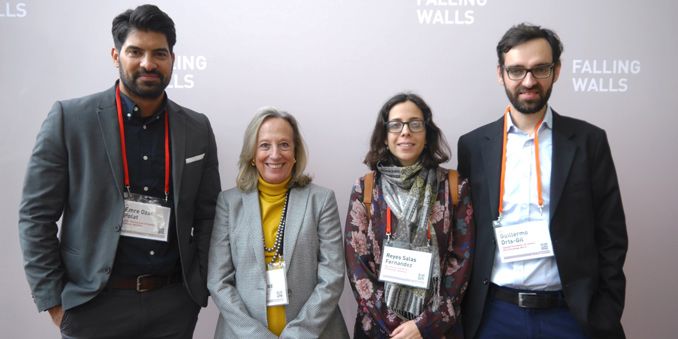 Last November 8th the international final of the Falling Walls Lab, a contest of young scientific talents, was held in Berlin. FECYT was there to support the candidates coming from Spain. Emre Ozan Polat, researcher at the Institute of Photonic Sciences (ICFO) and winner of Falling Walls Barcelona, ​​presented his project based on nanotechnology to monitor vital parameters with flexible and transparent devices that adhere to the skin.

On the other hand, the winner of Fallling Walls Madrid, María de los Reyes Salas Fernández, of the University of Seville and the Max Planck Institute, presented her project on the latest advances in bird tracking techniques with the aim of more selective use of industrial pesticides. Both candidates competed with hundred international researchers, and were evaluated by a jury composed of international experts.

Both the Secretary of State for Research, Development and Innovation (SEIDI), and FECYT were in Berlin to support the candidates coming from Spain, represented by Teresa Díez Iturrioz, Advisor and Spokesperson of SEIDI, and Guillermo Orts, the Scientific Coordinator of FECYT in Germany.

The winner of this year's international final of Falling Walls Lab was the researcher at the University of Vienna Agnes Reiner, for her project on early detection of ovarian cancer.