Debate around scientific culture and crises in Manchester 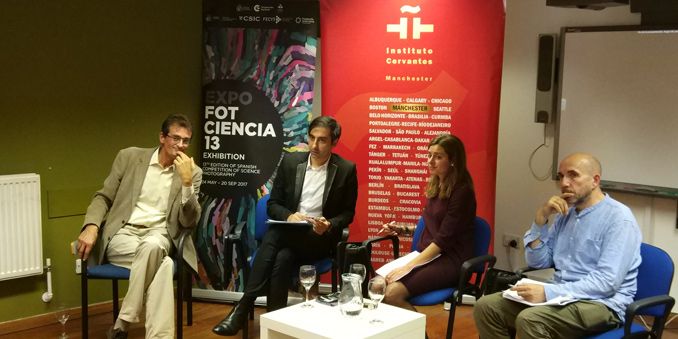 The debate “Is more scientific culture the solution to crises?” was held on 13th September in the Instituto Cervantes Manchester, as part of the scientific activities that have dressed up the scientific picture exhibition FOTCIENCIA13 this year.

The colloquium was inaugurated by the Director of Instituto Cervantes Manchester Francisco Oda and by cultural counsellor in the Spanish embassy in London Miguel Oliveros. They both summarized the range of scientific activities that both institutions carry out, praising their collaboration.

Next, the scientific coordinator in the Spanish embassy in London, Lorenzo Melchor, introduced the concept of the debate bringing the attention to the wide concept for “crisis” (from economical to political, social, climate change, biological, immigration, globalization, etc.) and what is understood as scientific culture (education, knowledges, critical thinking, involvement of the scientific community in the societal challenges, etc.)

The first speaker, Francisco A. González-Redondo, Senior Lecturer in History of Sciences in the Universidad Complutense de Madrid, covered the history of Spain through its different political regimes and political and social crises that came with them, from the 15th Century to nowadays. Francisco put them in relation to the scientific development in other countries and the scientific culture and education in Spain at the time. He concluded that the years with the highest development coincided with those with open borders, high talent circulation and high public support to research and innovation.

The second speaker, Elvira Uyarra, Senior Lecturer in the Alliance Manchester Business School in the University of Manchester, focused on regional economic imbalances in the United Kingdom and the role of the European Union (EU) structural funds in supporting and fostering not only infrastructures, but also innovation and research centres and entrepreneurship hubs. However, Elvira pointed out the lack of knowledge and awareness of these EU investments in the British society, since the regions with the highest investment from EU structural funds are also the ones that voted for “Brexit” in the EU referendum.

Lastly, Jaime Jackson, Salt Road artist director, showed his work in the confluence with different social , academic, and artistic groups to raise awareness about the repercussions of climate change in our world. His project Biomimicry connects through arts and sciences three European cities: Birmingham, Vitoria-Gasteiz and Oslo. Jaime pointed out the huge gap between knowledge and belief, and between knowing and feeling, stressing that arts can work together with sciences to close these gaps.