Science, culture and diplomacy all joined in Ambassadors for Science 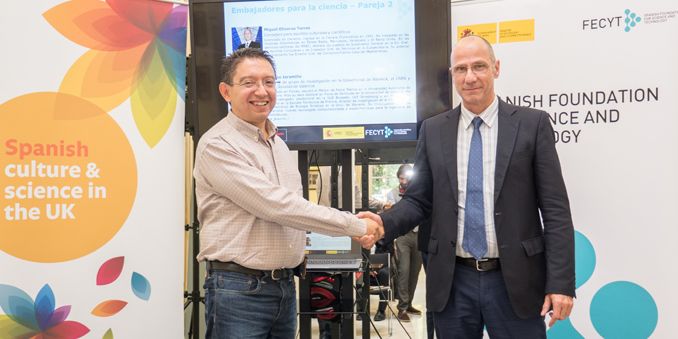 One of these groups was composed by the Counsellor for Cultural and Scientific Affairs of the Embassy of Spain in the United Kingdom Miguel Oliveros Torres, and for the Professor in Synthetic Biology of the University of Warwick Prof Alfonso Jaramillo.

Miguel visited Alfonso at the University of Warwick, where the scientist leads a research group on synthetic biology. There, Miguel learnt about the main activity of Alfonso’s team: genetic engineering of harmless virus for humans to fight against bacterial infectious, since antimicrobial resistance will be one great societal challenge in the coming future. The diplomat also witnessed some other research lines carried out in Alfonso’s lab related to antiageing or cancer treatments. During the whole day, Miguel visited different facilities at the university, and met with some Spanish researchers as well as with officials from the university.

On the other hand, Alfonso visited Miguel on 23rd November to the Office for Cultural and Scientific Affairs in the Spanish embassy in London. In the morning, they both went to the V&A Museum in London to meet with the Spanish researcher Dr Ana Cabrera. She talked to them about medieval textiles and, in particular, embroideries, dyes, and fibres. This meeting was part of an ongoing collaboration between the museum, the researcher and OCSA to celebrate a 2-day conference in June entitled “Collecting Spain”. In the afternoon, Alfonso came back with Miguel to the embassy. There, the professor observed the administrative management of most of the cultural activities that OCSA is involved in, which cover a wide range of disciplines such as art, music, dance, theatre, cinema, science, etc. Alfonso got especially interested in learning about the diplomatic relationships between countries, so Miguel explained to him the different level of actions and responses during a tension upscale between two countries.

Miguel stated that “this visit made me aware about the challenges and long-term commitment of scientific research. As any other activity, research is affected not only by the trial-and-error method, but also by significant administrative and financial burdens that may cause big hurdles in its endeavours. It is also true that Alfonso has such a good institutional support, as he is such a talented professional and worldwide renowned for his research in the very frontiers of knowledge”.

On the other hand, Alfonso was very amazed with “the cultural and scientific office of the Spanish embassy, its wide range of activities, and its commitment to promote Spanish culture and science”. His brief exposure to the diplomatic world allowed him to become aware of “the complexity of diplomatic responses when two countries are immersed in a political upscale”.

Miguel explained that “relationships between specific sectors and the Ministry for Foreign Affairs and Cooperation (MAEC) have always been a reality. Indeed, all conventions and agreements in multilateral organisations have been managed by MAEC, properly advised and supported by technical experts in the field. In 2000, due to a Royal Decree, the different government departments took over their international responsibilities in their corresponding matters”.

Alfonso, meanwhile, thanked for his experience in the scheme: “I have learnt a lot about the activity of an embassy thanks to the training seminars during the first days and the two days that I have spent with Miguel. Also, this opportunity has made me aware of how science can trigger multiple synergies with diplomacy through many different channels”.

Accordingly, Miguel Oliveros guaranteed that “science diplomacy is highly important and useful for Spain”. Regarding the “Ambassadors for Science” scheme, Miguel emphasised that “it is an excellent formula to put together public managers with Spanish scientists currently working in the UK”.