“Science in the Classroom” triggers creativity among students 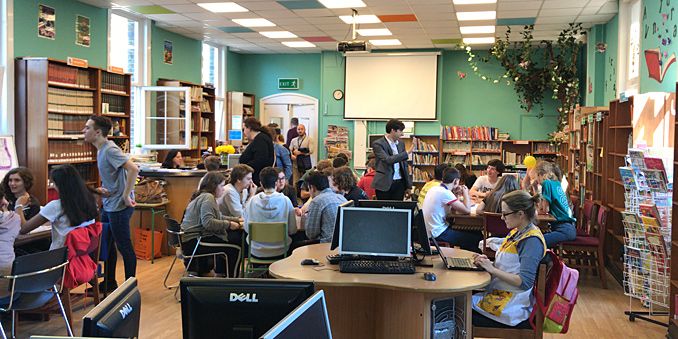 Last 18th April, the Spanish School Vicente Cañada Blanch in London held a new session of “Science in the Classroom”. This time, students were part of a simulation game to design a product to tackle one sustainable developmental goal (SDG) such as draughts, pollution or gender inequalities. Once they designed it, they had to look for investment for product development and marketing before a panel of potential investors.

The workshop was divided in three stages. In the first one, Senior Lecturer in Marketing in the University of Westminster Dr Jose Luis Ruiz-Alba and Corporate Partnerships Associate in Imperial College London Dr Sandra Esteras-Chopo both presented basic concepts about entrepreneurship, knowledge transfer, and university-industry relationships. Carmen Palomo, Teacher in Spanish and Literature, said: “Jose Luis showed in a simple and clarifying way how an idea can become an enterprise, a future project or a way of life”. She also referred to Sandra in the following terms: “her talk allowed us to understand how to draw the treasure map from an idea to its product distribution and marketing”.

In the second stage, students were grouped in six-people parties to design the product. They made use of items such as hangs, plastic cups, clips, balloons, paper rolls, etc. Students also had to design their commercialization strategy. At the beginning, they were a bit hesitant and surprised, but in just a few minutes many ideas started to flow.

Next, each party had to present their products with an elevator pitch before the two speakers and Lorenzo Melchor, project manager of “Science in the Classroom” and FECYT science coordinator in the Spanish embassy in London. The panel asked students different questions regarding product viability and commercial strategies.

Juan Carlos, Teacher in Economics, said that the activity was very well organized to trigger creativity and team-work: “The three stages (presentation of theoretical concepts, teamwork and elevator pitch) were all very well thought”.

Sandra was impressed with the students’ response: “No team went blank or blocked in long arguments. It was very interesting to see different topics being repeated: respiratory issues, energy, plastic pollution in oceans, gender imbalances… It is such a good indicator of what teenagers are worried about”.

For Jose Luis, the session fostered creativity and skills to work under time pressure: “while some had to lead and coordinate people, others had to give way”.

Sandra also considered the session as a good exercise to introduce concepts such as innovation and technology transfer: “It was interesting to see Silicon Valley and MIT as their references for innovation. It would be good to pass on the message that there is also good research and innovation in both the UK and Spain”.

Lastly, José Luis summed up the main students’ challenges and achievements. “In general, while most groups were good at designing their communication strategies, especially for social networks, they found more challenges regarding distribution channels. This makes sense as they are more exposed to communication approaches as customers. So I trust this was an excellent learning process for them to note the importance of distribution”.

Deputy Head Teacher Fernando de la Cruz concluded: “The experience was great for students. They had to work as a team, to think and seek imaginative solutions, and to present and defend their project with solid arguments in front of their colleagues and experts”.

About “Science in the Classroom”

“Science in the Classroom” is a programme organised by the Spanish Foundation for Science and Technology (FECYT) and the Office for Cultural and Scientific Affairs of the Embassy of Spain in London, by which a scientist or an engineer per month visits 14-18 years-old students in the Spanish School Vicente Cañada Blanch in London until the end of the term. This programme began in the year 2015-2016, continued during 2016-2017 and is now back in the year 2017-2018. It is also supported by the Spanish Education Office in the United Kingdom and the Republic of Ireland, the Spanish School Vicente Cañada Blanch, and the Society of Spanish Researchers in the United Kingdom (SRUK/CERU). “Science in the Classroom” is embedded in the FECYT line of action related to the promotion of scientific culture and dissemination, and support for internationalization of Spanish science.