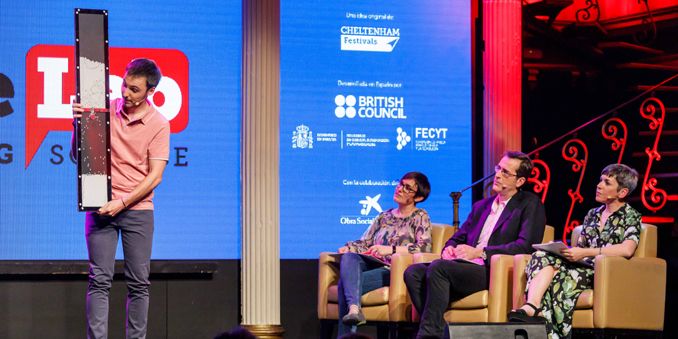 Iñaki Echeverría Huarte will represent Spain in the international final round of the FameLab scientific monologues, after winning the national final, which was presided over by H.M. Queen Doña Letizia. Also present at the event were the Minister of Science, Innovation and Universities, Pedro Duque, and the UK ambassador to Spain, Mr. Simon Manley.

FameLab is an international contest of scientific monologues organised in Spain by the Spanish Foundation for Science and Technology (FECYT) and the British Council, with the collaboration of the Obra Social “la Caixa”.

Iñaki Echeverría Huarte was born in Pamplona and is 24 years old. He studied a Master's degree in modelling and mathematical research and is currently in his first year of doctoral thesis at the University of Navarre. The research line he follows is that of pedestrian dynamics, trying to understand how people behave in risk situations when evacuating certain areas.

He won over the rest of the participants with the monologue “Let me out”, where he describes the FIS (faster is slower) phenomenon proposed by the physicist Dirk Helbing in 1995, which suggests that placing an obstacle near the exit doors could facilitate an evacuation in case of emergency.

Mariola Penadés Fon was second, with her monologue, entitled “The silence of my neurons”, which explained the neuronal mechanism by which we inhibit the perception of our own sensory stimuli.

Kevin Fernández-Cosials, 29, came in third. He is from Madrid and is currently doing a Post-Doc at the Escuela Superior de Ingenieros de Minas (School of Mining Engineering) of the Polytechnic University of Madrid. In his monologue, entitled “Risky Business”, he explained how our perception of the risk of accidents influences the design of safety systems.

The jury was composed of Carmen Agustín Pavón, a doctor in Neurosciences and scientific divulger; Marcos Pérez Maldonado, a graduate in Physics, who has been the technical director of the Casa de las Ciencias in A Coruña for 20 years; and Pampa García Molina, a graduate in Theoretical Physics and editor-in-chief of the SINC Agency, the first state-wide public agency specialising in information in Spanish on science, technology and innovation.

The final of the seventh FameLab Spain edition was presented by Eduardo Aldán and followed live on the Youtube channel and Facebook page of FECYT by more than 700 people.

History of FameLab
FameLab was created in 2005 thanks to an original idea of the Cheltenham Festival, whose main objective is to promote the dissemination of science by identifying, training and publicizing new talents in science through an innovative format: the scientific monologue.

Since 2007, thanks to a partnership with the British Council, FameLab has been held in more than 30 countries in Europe, Asia, Africa and the United States. More than 7,000 researchers from all over the world have participated in some of its editions.

Mathematics student Pedro Daniel Pajares was the winner of last year's edition. Another mathematician, Eduardo Sáenz de Cabezón, won the first edition and is nowadays one of the most popular science youtubers in Spain. The biologists Ricardo Moure, Álvaro Morales and Alba Aguión were the winners of the second, third and fourth editions, respectively. All monologues from previous editions are available on You Tube.

All information on and rules of the contest can be found at www.famelab.es