Official presentation of the Society of Spanish Researchers in France (SIEF) 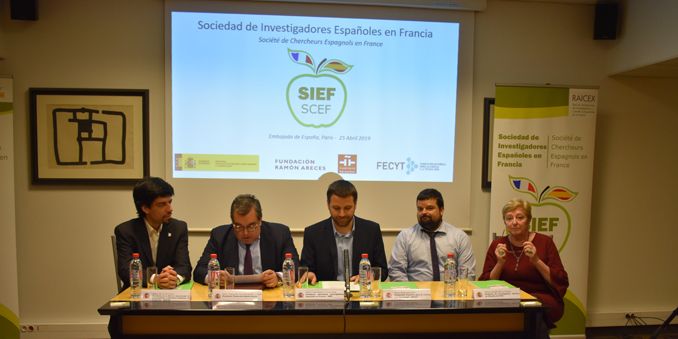 The official launch of the Society of Spanish Researchers in France (SIEF) took place in the auditorium of the Embassy of Spain in Paris on April 25th.

The president of SIEF José Manuel Torres opened the meeting presenting the new scientific society and its challenges, as well as the inclusion of SIEF in the Network of Spanish scientists abroad (RAICEX). The second part of the day focused on the opportunities - and some of the existing challenges - for the professional development of Spanish researchers in France. The event was closed by Mr. Fernando Carderera Soler, Ambassador of Spain to France.

The organization and celebration of this event has had the support of the Embassy, the Spanish Foundation for Science and Technology (FECYT) and the Ramón Areces Foundation.

The Society of Spanish Researchers in France follows the example of other associations of Spanish scientists already existing in other countries such as the United States, the United Kingdom and Belgium. The group is open to any researcher who develops his activity in universities, hospitals, technological or industrial centers in France. Among its main objectives include the following: facilitate contact, communication and collaboration within the group of Spanish researchers in France; encourage the exchange of ideas to promote scientific innovation; organize scientific events to disseminate the progress of the research work carried out by Spanish researchers, and facilitate the integration of researchers who have recently arrived in the country.

SIEF has planned to carry out numerous events to meet its objectives; in particular, the promotion of scientific conferences, research symposiums, and presentations by invited researchers, etc. In addition – likewise to other Spanish associations of researchers abroad - SIEF wishes to explore the possibility of establishing future agreements with foundations and various institutions in order to launch scientific exchanges, prizes or grants to facilitate research stays.