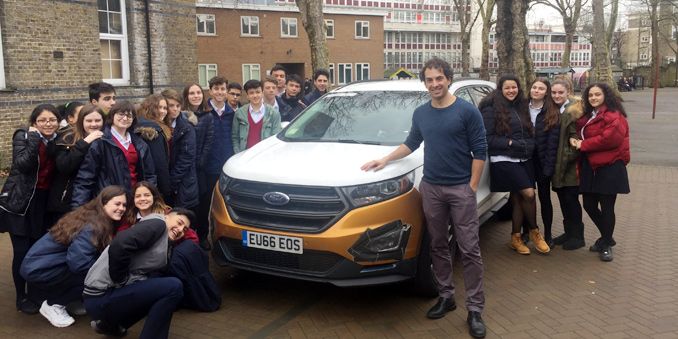 Last 15th March, a new session of “Science in the Classroom” was held in the Spanish School Vicente Cañada Blanch in London. Javier Castellano, engineer in Ford and diesel-engines specialist, talked about the future of automotive industry to 15-18-year-old students.

Engineering in the automotive industry

The Spanish engineer started both talks telling his day-to-day at the office and explaining what “calibration” meant: “It is the process to integrate hardware and software in order to generate an optimal and safety operating in compliance with the current regulatory frameworks”. Afterwards, he mentioned the problem of air pollution, showing the same picture of Pekin taken in two different days. In one of them the cleanliness of the sky after the rain was appreciated but in the other there was a visible layer of pollution.

According to Carmen Palomo, teacher in Spanish language and literature, students enjoyed the practical scope of the talk: “For students, meeting someone who works in such an attractive field is a way to believe in effort necessity, personal self-improvement, and willingness to achieve everything we resolve to do in our life”.

Nuria Peris, teacher in Physics and Chemistry, underlined the attention and interest from all students in Javier’s talk. She remarked Javier was a “very dynamic person”. She also pointed out that as everyone “has used a car in their lives”, the presentation was “even more interesting”.

The future of automotive industry

Castellano addressed different topics related to the automotive industry too. He covered from the Volkswagen’s controversy to the new emissions requirements by the European Union, without ignoring the future of electric engines. “From an environmental perspective, electric cars have also a problem. Their batteries weight 400 kilos and they are made of cadmium, copper and lithium. There are not enough mines to supply the whole planet. And last but not least, it is not easy to extinguish a fire if the battery start burning”. Having said this, Javier Castellano stressed that the future will likely be electrical.

Lorenzo Melchor, organizer of “Science in the Classroom” and FECYT science coordinator in the Spanish embassy in London, expressed his satisfaction after the talk: “Seeing Javier exposing the pros and cons about the different kind of engines was very enriching. It is clear that engines will coexist for a while, but the industry will have to adapt to meet demand and, mainly, to the emissions regulation and political decisions made by nations”.

Finally, Carmen Pinilla, director of Spanish School Vicente Cañada Blanch in London, praised the work done by ‘Science in the Classroom’, allowing the students to “get first-hand knowledge” of the professional experiences in their pertinent fields. “This opportunity gives them information about unknown worlds for them. Besides that, it helps them to clarify about their professional doubts beyond school, making it easier to decide their degree studies”.

“Science in the Classroom” is a programme organised by the Spanish Foundation for Science and Technology (FECYT) and the Office for Cultural and Scientific Affairs of the Embassy of Spain in London, by which a scientist or an engineer per month visits 14-18 years-old students in the Spanish School Vicente Cañada Blanch in London until the end of the term. This programme began in the year 2015-2016, continued during 2016-2017 and is now back in the year 2017-2018. It is also supported by the Spanish Education Office in the United Kingdom and the Republic of Ireland, the Spanish School Vicente Cañada Blanch, and the Society of Spanish Researchers in the United Kingdom (SRUK/CERU). “Science in the Classroom” is embedded in the FECYT line of action related to the promotion of scientific culture and dissemination, and support for internationalization of Spanish science.