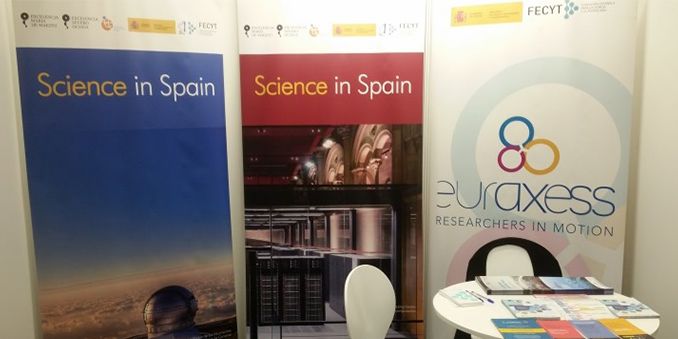 The Spanish Foundation for Science and Technology (FECYT) travelled to London, for the third year in a row, to promote the Spanish R & D system and inform about opportunities to develop a research career in Spain.

On October 3rd, a representative from FECYT, Cristina Gracia, met with the Community of Spanish Scientists in the United Kingdom (CERU-SRUK) at the University College London (UCL)  and presented the new, 2018-2019, edition of the Science in Spain collection.

During this meeting, the new section “Science in Spain” of the website EURAXESS Spain, was presented. This section includes a map of the different calls available in Spain to fund researchers at different stages of their careers and information on expected recruitment processes at Public Research Organizations, centres and units of excellence Severo Ochoa and María de Maeztu, and MSCA-COFUND programmes.

The session was opened by the Director of the London delegation of CERU / SRUK, Lorenzo de la Rica, who presented some of the activities organized by the association. Afterwards, Yesenia Otamendi presented the local initiative from “Fomento de San Sebastián” to attract scientific and entrepreneurial talent. Additionally, Sergi Novo from Acciò, presented the MSCA-COFUND programme TECNIOspring Industry which aims at promoting research in the Catalan industrial sector.

The fair counted with the participation of FECYT. At stand 21 “Science in Spain”, FECYT informed students and scientists about the variety of opportunities and research organizations in Spain.