FECYT organised a debate about Science, Communication, and Society in London 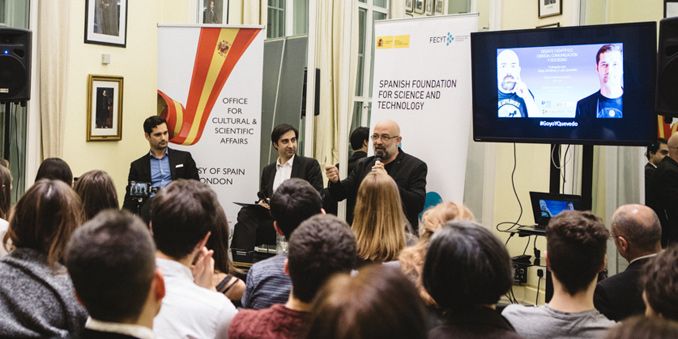 Last 22nd November, the debate “Science, Communication, and Society: colloquium with Goyo Jimenez and Luis Quevedo” was held in the Spanish embassy in London. The event was inaugurated by the Counsellor for Cultural and Scientific Affairs Miguel Oliveros, and was then chaired by the FECYT Science Coordinator Lorenzo Melchor.

With a total of 65 attendees and through the experiences of two experts in science communication such as science journalist Luis Quevedo and TV presenter and comedian Goyo Jiménez, the debate focused on the main scientific and technological breakthroughs nowadays, the main challenges in the world of media and communication, and the need for better science communication to outreach society.

When asked about the main scientific discovery that will determine the coming future, Luis Quevedo answered that the genetic edition technique known as CRISPR will be crucial. He emphasized that scientists must actively engage, as regular citizens as they are, in social debates, thus investing time to explain their discoveries to the general public in an accessible way. In that process of active engagement, Quevedo stressed out that science communicators, be it researchers, journalists or any other professional, should ask themselves what is failing in science communications nowadays for pseudoscience and other public misconceptions to be spread that easily.

TV presenter Goyo Jiménez explained how he communicates scientific contents using comedy through his monologues and shows. Jimenez is convinced that more and better science communication is needed because, according to his own words: “we need a new model for our country and I firmly believe on the idea that our country must be one devoted to science, so there must be more citizens committed to science who ask their MPs to invest more in a science-based model”.

Different formats by which science reaches the general public were discussed during the debate. For instance, the science documentary “In search of the lost future” by Luis Quevedo, which was scheduled to be shown in the Spanish school Vicente Cañada Blanch and in the Instituto Cervantes Manchester in the days after the debate; the TV show “Órbita Laika” broadcasted in La2 on Sundays at 8:30pm and presented by Goyo Jimenez; the upcoming documentary series “The extraordinary powers of human body” in Cero (Movistar+) with Luis Quevedo; or the annual contest of scientific monologues FAMELAB, which FECYT and the British Council both organize in Spain every year and that Goyo Jiménez has presented several times.

The audience actively participated in the debate with many questions and comparisons between science communication in the Anglo-Saxon world and the Spanish-speaking cultures. Luis Quevedo and Goyo Jimenez always answered to these questions based on their own opinions and professional experiences.

The debate was organized by FECYT and the Office for Cultural and Scientific Affairs of the Spanish Embassy in London.