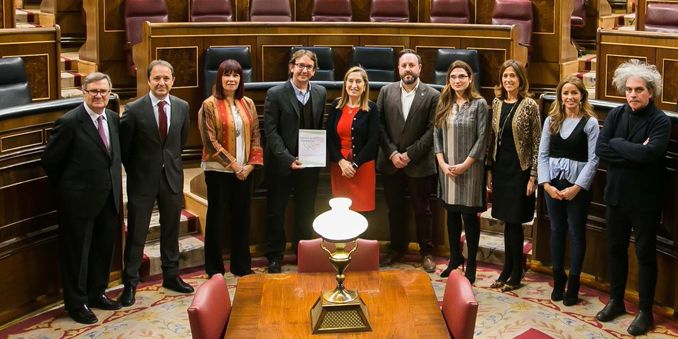 The civil society initiative “Ciencia en el Parlamento” aims to make the case for scientific evidence to be one more dimension in public-policy making processes. For this to happen, and as part of the 40th anniversary of the Spanish Constitution commemoration, the initiative has agreed with the Spanish Congress of Deputies to organize “#CienciaenelParlamento 2018” on 6-7 November. Since January 2018, Ciencia en el Parlamento has gathered the support of more than 150 Spanish research organizations (including FECYT) and more than 2000 people.

“#CienciaenelParlamento 2018” will be a 2-day event with public debates and bilateral meetings in between researchers and Members of the Spanish Parliament. In these sessions, a number of topics of interest for the Parliament and with enough research performed and scientific evidence available will be discussed from the scientific and policy views. The aim of the event is to facilitate politicians and researchers getting to know each other better. Also, it expects to improve the dialogue so that public policy is better informed with scientific evidence and so that research can better understand societal needs. Currently, “Ciencia en el Parlamento” and Spanish Parliament representatives are selecting the topics that will be discussed this year, which will be publicly released soon.

Science advice to the legislative power is a reality in a number of countries and it requires the participation of the so-called “science advice officers”. These are in charge of both identifying topics of interest for policy makers and gathering evidence about it using a multi-disciplinary approach.

With the aim of preparing the event in Congress in November, “Ciencia en el Parlamento” and FECYT collaborate in the organization of two preparatory sessions. Selected researchers through an open call will attend a number of seminars of international and national professionals in the field, together with workshops to improve skills required for science advice (evidence gathering, communication, etc.), and will be also exposed to current science advice mechanisms present in the Spanish Parliament.

All the information about the open call is available at the “Ciencia en el Parlamento” website. It addresses researchers with an interest in the intersection of science, society and policy making. The application phase is open from May 14th to May 31st (both inclusive). The selection committee encourages female researchers from all disciplines to apply.

FECYT and its role in scientific advice in Spain

Since 2012, FECYT is heavily involved in developing the Spanish strategy for science diplomacy, understood as the establishment of proper mechanisms to provide science advice to the Spanish foreign policy. In this field, it is worth highlighting that FECYT has deployed three scientific coordinators to the Embassies of Spain in Washington DC, Berlin and London. Also, FECYT, together with the Secretary of State for Research, Development and Innovation, has worked with the Ministry of Foreign Affairs and Cooperation and other stakeholders in the creation of a national strategy for science diplomacy. A good number of science diplomacy activities of FECYT are listed here. Some activities aiming to better connect science and public policies are worth noting such as the debate about science advice in Spain and the UK celebrated in June 2017 in Madrid or the pairing scheme “Ambassadors for Science” developed in the Spanish embassy in London.

Moreover, FECYT activities aim to raise awareness among different stakeholders about the importance of establishing channels of dialogue and mutual learning between science and society. In other words, to making sure that science is done with and for society.